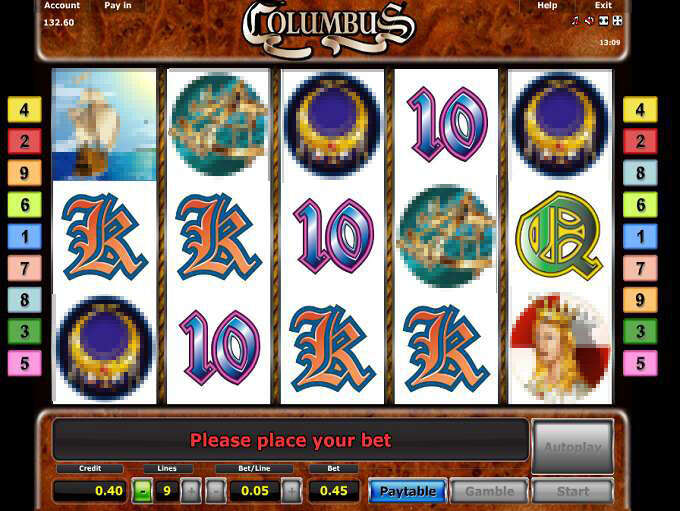 Columbus is perhaps one of the most famous historical figures as he discovered the Americas. Novomatic pays a big tribute to this personality in this classic slot game. Players who are history buffs will like to play Columbus slot. It is a fve-reel and nine-pay line game. The theme is travel and it features Christopher Columbus, the Italian explorer who helped bridge the ancient and new worlds.

This game offers you a vibrant design and the animations have been done with style and you will find them scattered across your screen.

You can place your bets and set the pay line numbers to begin your game. You can then spin the reels and match the winning combinations of symbols. You will come across the famous traveler’s portrait, ships and several navigational devices that form the symbols of this game.

You will find symbols on the reels and they include Columbus, Queen Isabella, a Sextant, a Golden Necklace, the Nina, the Pinta and the Santa Maria along with three scatter ship symbols. You will also come across symbols that have card values ranging from ace through nine. Columbus is the wild icon that substitutes all other symbols except the scatter ship symbols. Columbus is also the symbol that you the highest as five such symbols can help a player unlock the 20,000-coin classic jackpot. The three ships that make up the scatter symbol also help unlock free games.

Bonuses have been integrated into this game to make the game play more exciting. Columbus, the wild symbol, helps the players complete their winning lines by substituting for any symbol except the ships’ scatter symbol and the special bonus game symbol. Players can get a reward of up to ten free spins when they get the three scatter ships on reels 1, 3 and 5 on the same spin and on an active pay line. The ships will also act as extra wilds during the event of free games. They can retrigger extra free spins when they land on the same reels again.

During free spins, the special bonus game symbol appears and that is the ship against the sunset background. Once the player wins, he or she may press the `bet’ button to initiate this bonus game. The player can also guess the color of the last card in the shuffling deck. The correct answer will give the player an opportunity to bet again or take the winnings. A wrong answer will make you lose all credits for that round.

Currenty there are no reviews for Columbus. Be the first one who will review it.