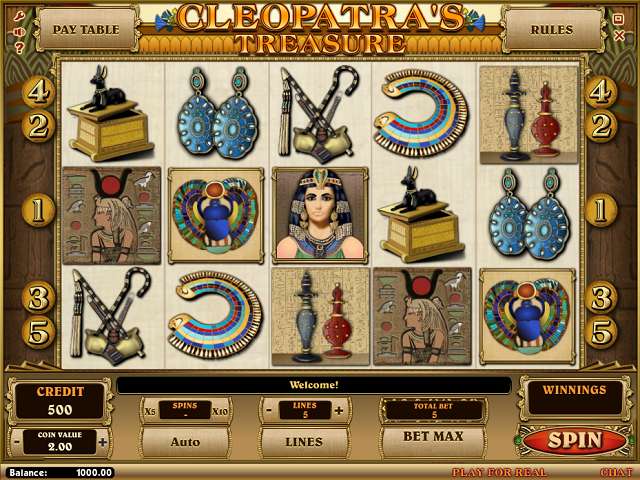 Cleopatra’s Treasure is one of the nicest crafted Ancient Egyptian themed video slots on the net, even if it’s titular character has appeared in quite possibly more video slots than any other character, real or fictional. Cleopatra’s Treasure has some really authentic looking icons, without the silly need for oodles of gold colours, which you find in similar titles. The slot itself is a 5-reel, 5 payline title, with wagers ranging from 0.02 up to 2.00 in total. Players can attempt to win up to a total of 5,000 coins in this video slot. If we’re being perfectly honest; as good as Cleopatra’s Treasure looks, it could have done with a few more special features.

Special features however, are somewhat limited in this game. There only appears to be two special features in the entire game. The first is the orientation of the winning paylines. Players are able to win with combinations that stretch across the reels from right to left, as well as the more conventional left to right structure.

The only other special feature is the bonus round. Cleopatra herself acts as the game’s bonus icon for this to happen. If the player is fortunate enough to trigger 3 or more Cleopatra icons anywhere on the reels, they will trigger the Temple Bonus.

iSoftBet have decided against including any wilds or scatter icons in this video slot game. That is a decision which regrettably, most players will not really like. If you want to lay your hands on the jackpot then, you are going to have to do it without the aid of wilds. This means that you’ll need to bag 5 scarab amulets on any active payline.

So, to the bonus round then. What you have in Cleopatra’s Treasure is a pick and win bonus game. Once the bonus game has been triggered, the player is entitled to choose from one of three Sarcophagi. Inside each of these, there will be prizes. Although the bonus is a game of luck, if you pick the right Sarcophagus, then you will win a really decent prize, whilst the other two have moderate and fair prizes inside them.

Currenty there are no reviews for Cleopatras Treasure. Be the first one who will review it.