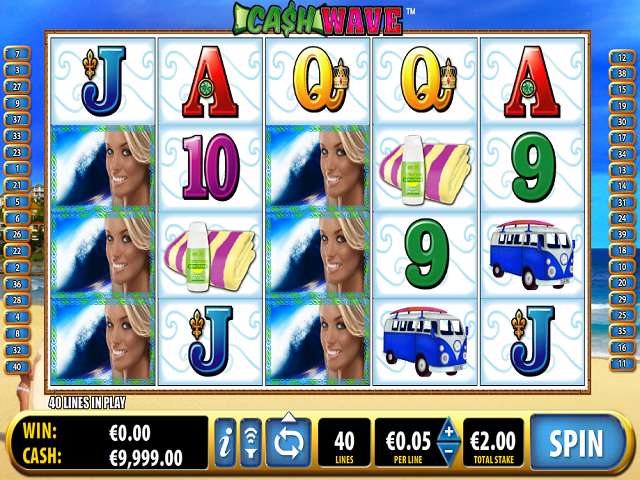 This game is currently not available
Please see other games from the same category.

Cash Wave is a beach holiday themed slots machine from Bally Technologies which is a company that specializes in making slot machines. In this five reel and 40 pay line game, players can bet anywhere between £0.01 and £10.00 per line or £0.40 and £400.00 per game. While it may not offer an immense progressive jackpot, it does however have several ways to win. So if you are the type of person who loves to sit back and relax on the beach or simply having the winter blues, this might be the game for you as it caters for beginners and high rollers alike.

The design of the game is quite simple and straightforward, but the soundtrack for this game is almost nonexistent. It has little jingles when you win on any pay line which makes it seem a little old and outdated. For more help on this game, the help button is represented by the infobutton which brings up the rules and pay tables. The auto-play function is basic; all you need to do set the number of spins which can range between five and 25 spins.

Because of the beach theme, you expect to find sun block with a beach towel, flip flops, a minivan and a pretty blonde to be part of the graphics. The card symbols are also present but they seem to be a little plain-looking. The beach themed symbols do offer some of the bigger payouts compared to the card symbols in the game.

The game does offer free spins but these icons are a little hard to come by as they only appear in the second, third and fourth reels. But, if you are able to get three in a row, the stacked wilds feature comes into play. It starts off with the fifth reel becoming wild on the first spin then the fourth and fifth reels become wilds on the next spin. In other words, on every spin, starting from the right two reels become wilds until the end of your free spins. The unfortunate thing is that the free games cannot be re-triggered.

The wild symbol for this game is the Cash Wave logo which can substitute any symbol in the reels but it cannot replace the free games icon. They do have the highest pay outs in the game if you can get five in a row.

Currenty there are no reviews for Cash Wave. Be the first one who will review it.