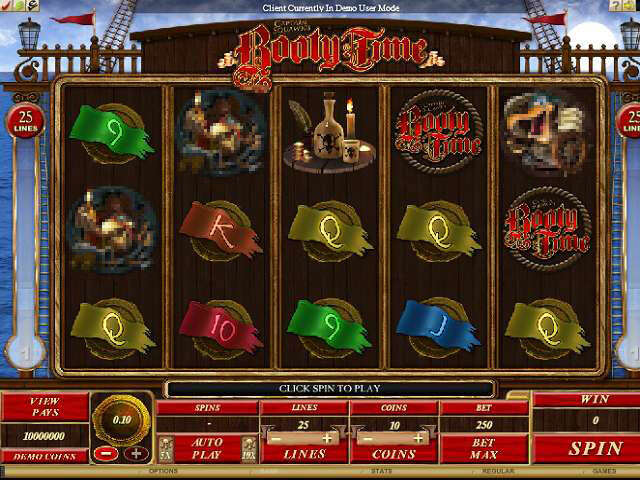 The booty in this title is a pirate's booty, which is the theme of this slot game created by Microgaming. The screen of Booty Time is at least somewhat reminiscent of a Pirate Ship, with flags flying and a ladder to take you up to the crow's nest. The music however, seems strangely subdued and not particularly appropriate for a high seas adventure.

Booty Time Slots features some of the creatures and other objects you'd expect to find on an old time seafaring journey. These include the ocean and tropical birds, the Pelican and the Parrot. You'll also find a Compass spinning on the reels as well as a bottle of Rum. There is also a swashbuckling PIrate symbol which offers the biggest payoff in the game.

The Booty Time Logo, which is spelled out in red letters inside a gold circle, operates as the game's Wild symbol. A pirate's open Treasure Chest, which is overflowing with gold coins, functions as the game's Scatter symbol.

The playing card symbols make up most of the spots on the reels, though in this game, they are made to look like torn pieces of paper. The best payoffs, however, come with the other symbols, particularly the Pirate. Get five of him on one line and you'll collect 2,500 coins.

The best and most frequent returns in Booty Time come in the bonus round which has several features. First, the Scatter symbols which won you the free spins will be changed into gold coins. You will then select one of the coins to reveal how many picks you will have on the next screen.

You will then be taken to a board containing 15 Treasure Chests. Whatever number that appeared on the coin you chose will be the number of Treasure Chests you can select on this screen. Each one you pick will contain either a total of spins or a multiplier or both. The amount of spins and multipliers you choose will then be calculated and used as you then proceed to take your free spins.

Currenty there are no reviews for Booty Time. Be the first one who will review it.