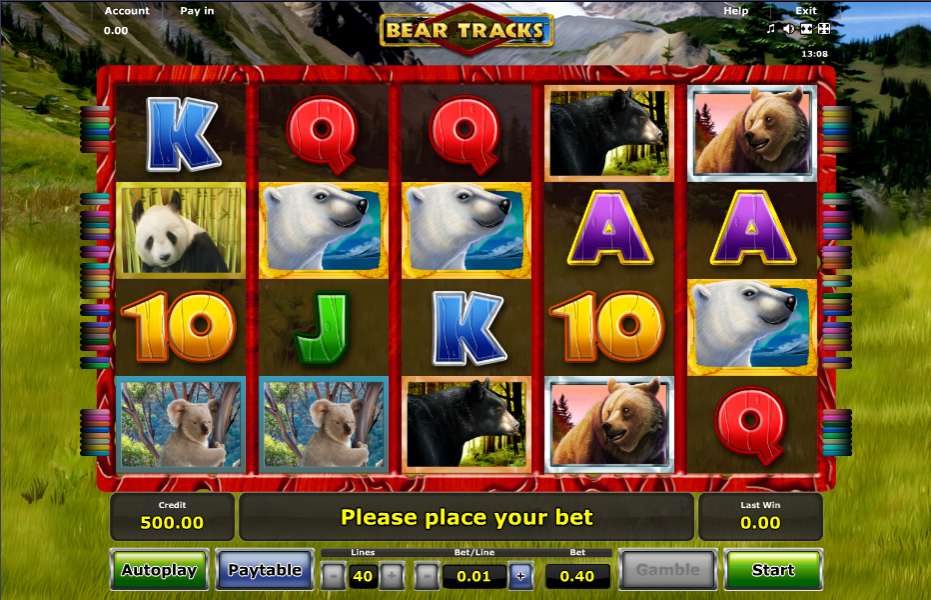 Bear Tracks is one of Novomatic’s more epic slots in terms of its visual design and its graphics. The game is, of course, based on bears, and there are lots of different species present on the reels for you to appreciate. Come to think of it, the reels are also rather impressive themselves. There are 5 of them in all, each containing 4 symbols, with 40 paylines spread over those 5 reels. Bear Tracks can see players able to bet anything from a base minimum of 0.40 per spin in this game, up to a modest maximum wager of 100.00 per spin. Bear Tracks carries a petite non-progressive prize which isn’t much to boast about that. That prize is won when players land the game’s title logo 5 times on any active payline.

The Bear Tracks logo does more than just dish out the non-progressive jackpot in the game, though. The symbol also appears as a wild in the game. As a wild, it can substitute for any other symbols barring bonus symbols.

The slot also features an Ultra Stacks system of gameplay. This means that any of the symbols which appear on the reels can appear in sizeable stacks, resulting in more likely winning combinations.

The bonus symbol in the game can pop up on the first reel. When it does it, players will note that it locks into place and triggers a free re-spin. If players continue to land bonus icons on the reels, they will keep landing more re-spins. This Bear Trap feature, as it is known, can see you pocket wins along the way. The ultimate objective, though, is to fill the reels with bonus symbols, as this will trigger the slot’s main feature, the free spin bonus.

Players will start the free spin bonus with a total of 15 free games. The Bear Trap feature will again come into play in this bonus. Again, players can pocket re-spins if the symbol keeps popping up on the reels. Once you’re down to your last free spin, you could potentially land additional free games, depending on how many bonus icons you have managed to land while playing. Up to 150 free spins can be won via this method, and that has its perks if you’re in it for the long haul. Wins are frequent enough, although the non-progressive is small, as we’ve said.

Currenty there are no reviews for Bear Tracks. Be the first one who will review it.