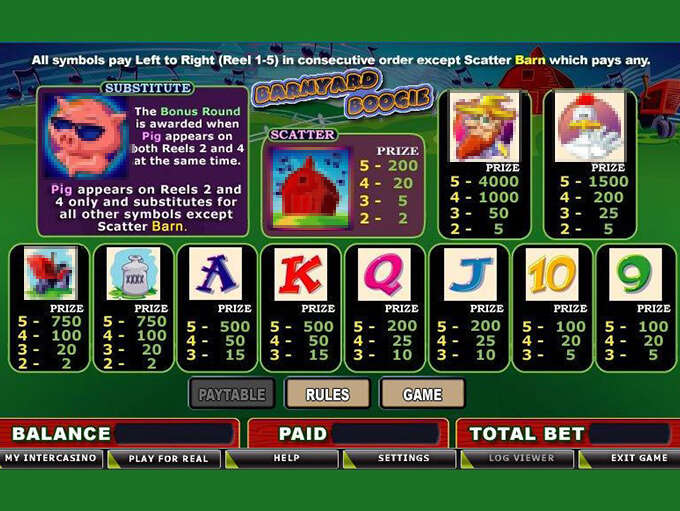 This is a five-reel, nine pay line, non-progressive video slot from Cryptologic software developers. It is one of the more recent creations for a company that has been designing gambling software for websites, since the concept of Internet real money gambling became real nearly twenty years ago. Play their games, means playing in very well-established, and safe hands.

The betting range is from 0.01 up to 20.00, which interestingly enough is presented across various increments. This game allows for a maximum wager of 180.00 over nine lines, and offers a top in-game prize of 4 000 coins.

Farm animals have a special place in our hearts, that special place is heavily relied upon for the theme of this online video slot game. It might be a little much for us to believe that some of our favourite farm animals can get involved in boogying, but such a funky game could have us boogying along with them too.

Symbols include a red-bearded farmer, pig sporting sunglasses and seemingly dancing a jig, a tractor, a (chicken) chicken, milk urn, and barn. The pig plays the wild icon, while the red-sided barn is the scatter. As is usual in most slot games, including online slots, the wild icon will substitute for all other icons barring the scatter. The wild is designed to not only for us to appreciate how cool a pig in shades can be, it also helps players to land even more winning combinations.

Other ordinary icons are card indices from Ace through to the number nine.Graphic rendering is a little immature for this writers taste, but if artistic integrity does not matter when one plays slots, then, there must be some fans of this game. Ambient sounds include normal kind of one-armed-bandit pull sounds, and a sort of musical twang for a win. Not very innovative we fear, much like the graphic design of this very basic online video slot game.

The bonus round is triggered when the wild pig appears on reels two and four. This is a “pick one” type feature, where the player is invited to choose objects. The aim of the game is to reveal where the dancing pigs are hiding. There are three opportunities on offer to find these pigs, and if we reveal the right one, up to a 1000 x multiplier can be won on the triggering wager.

This is a very good game, thank you