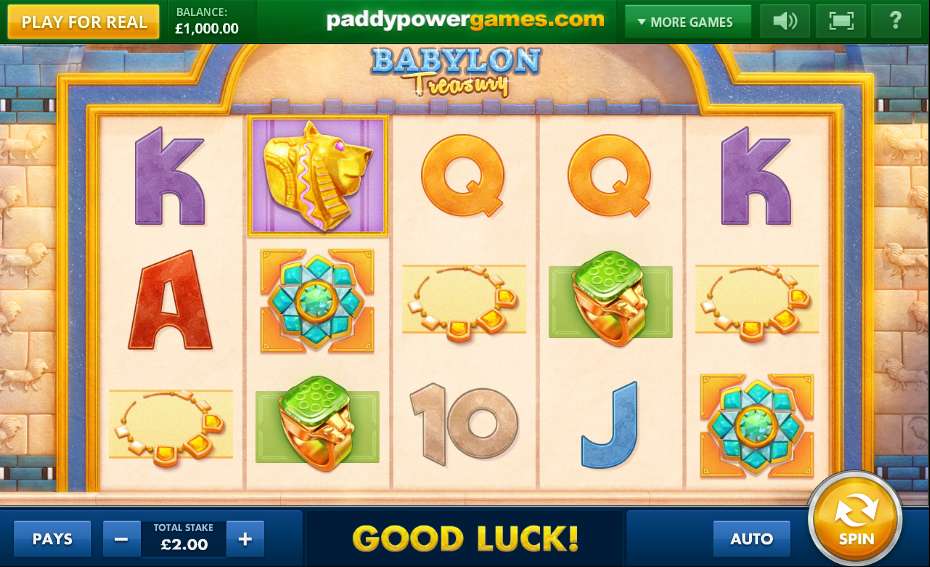 Babylon Treasury is another of the games that are exclusive to Paddy Power. As with most of the Paddy Power portfolio, it is a relatively simple video slot that offers five reels, and twenty pay-lines, where all pays are from the left to the right only. This is a non-progressive slot that offers a top in game prize of 2000 coins, as well as a whole host of ways to win more in various bonus features.

Five reels have been set into the backdrop of a Babylonian palace or temple. The theme is again like that of Egypt or Mayan; one of great wealth. Icons used are thematic of this civilisation which thrived thousands of years ago, and then melted into the Dark Ages, as so many of these civilisations seemed to do.

The wild icon is what might be a death mask, while additional symbols are the golden head of a lion, a piece of turquoise mosaic, an emerald and Gold rings, and necklace set with yellow gems. Balance of symbols are Ace, King, Queen, Jack and ten card indices. All other icons are responsible for triggering bonus games. Colours are quite nice, icons are relatively well illustrated but fall short of being artistic, sounds are we suppose; sort of Babylonian, although this writer does not know that much about this particular culture.

A very simple user interface allows the player to change the coin size only. So, we believe it safe to assume that pay-lines are fixed at twenty. Players may start with a minimum stake of 0.20, which would ostensibly be a penny a line. This may be increase up to a huge wager of 1000.00. It hardly seems likely that any sensible slots fan would opt to risk this much money on a game with a top base game prize of 2000.00.  Although there is also the possibility of landing a jackpot prize that is a 500 x multiplier on wager!

A bonus game is triggered by the icon that represents the Wheel of Babylon. Despite having tried hard, we were not lucky enough to get into this feature. When the bonus symbol appears and triggers the wheel, bonus games are awarded from within the reel. One of these bonus games it the Jackpot which offers the 500 x multiplier. The other two bonus features are a gem collecting game called Magic Picks, and a Golden Free Spins feature which they claim offers some nice big wins.

Currenty there are no reviews for Babylon Treasury. Be the first one who will review it.