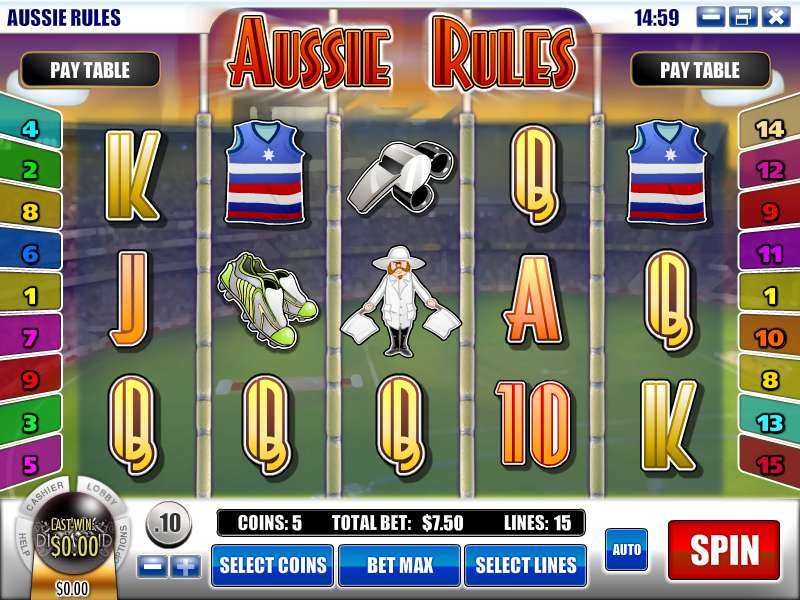 This new game utilizes the popular sport from Australia as its theme. You’ll find that many of the people and items that are a part of the game are also a part of this slot, which is a recent creation of Rival Gaming.

The game board resembles a playing stadium, with the green of the playing field making up the background for the five reels. Among the symbols you’ll find in the game are a pair of playing shoes, a player’s jersey and a referee’s whistle.

The Wild symbol in this game is a Referee, who, in the normal manner of Aussie Rules Football, is holding two flags. The Wild replaces all symbols except the two bonus symbols. The Scatter symbol in Aussie Rules is a Sports Bottle. Get three of them on a spin and you will win free spins, possibly a lot of free spins.

There is another bonus symbol in this game, a Football. If you can get three of that symbol, you will play a bonus game that is potentially quite lucrative.

The most likely way to get a big payoff in Aussie Rules Slots is to win your way into either of the bonus rounds. If you get three of the Sports Bottle Scatter symbol, you will win ten free spins. Get four Scatters and you will receive 20 free spins. If you can get all five Scatter symbols during a spin, you will collect 100 free spins. Even better is that each of your bonus spins receives a 3x multiplier for any win you collect.

The other bonus game takes you to the stadium for an animated feature. When you get three of the Football symbols, you’ll see a uniformed player who is given a football. An icon appears with the word Kick. You click that symbol when you are ready and the player will launch a kick towards the distant goal posts. You’ll hear the sound of the crowd roaring as your bonus is posted on the screen.

Currenty there are no reviews for Aussie Rules. Be the first one who will review it.