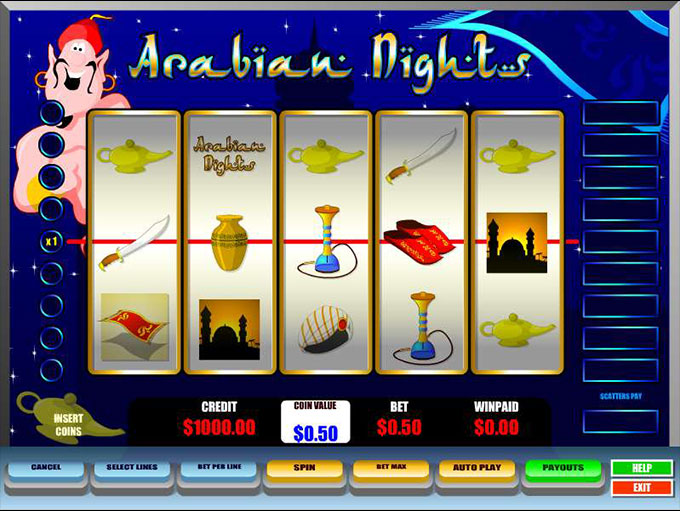 Arabian themes are quite popular in literature, art and even movies. However, they also make a significant representation in slot gaming. Amongst the array of slot games inspired by an Arabian theme is Arabian Nights - a slot game developed by NetEnt. The game comes with a 5 by 3 layout and features ten pay lines. Some of the features loaded in the game include wild and scatter symbols as well as free spins round.

The Arabian themed slot also features a batting range that cuts across a wide range of wagering preferences. The wagering limit starts from as little as ten cents and goes up to two hundred dollars - It doesn't matter whether you are on a shoestring budget or with a far bankroll, you can still enjoy the game.

The game can be played on multiple devices covering mobile, tablet and desktop operating systems.

As you may have probably guessed, the design and dynamics of the game will be influenced by its Arabian theme. This fact is evident in the symbols used in the game which includes those of magic lamps, camels, tents, sabers as well as native Arabian shoes.

The symbols used in the game can be classified into two value grids. The high value grid consists of symbols that resonate with the theme of the game (like the ones mentioned above) while the low value grid consists of playing card symbols such as those of A, K, Q, J, 9 and 10. To win a reward in the game, you will need to land a matching combination of symbols on the reels. Since the different symbols come with different values, the value of a matching combination will depend on the value of the symbols involved.

Besides the looking to land matching combinations involving high value symbols, there’s another feature you should look out for: the lines evenly marked with hexagonal gemstones. The prominence of this feature becomes obvious in the bonus round.

Then there are wild and scatter symbols that spice up the game. The wild symbol of the game is represented by the symbol of the prince which can replace other regular symbols to land winning combinations. What’s more, wins involving the wild will be subject to a 2x multiplier. You also stand the chance to win other prizes such as the progresive jackpot if you are lucky enough to spin more than two wilds.

On the other hand, the scatter symbol of the game is represented by magic lamps which is the key to activating the free spins round of the game.

Land at least three scatters and you will be ushered into the realm of free spins starting with 15 free spins. The crux of the game is its progressive jackpot which is triggered when five wild symbols show up when you are betting the maximum number of coins.

Currenty there are no reviews for Arabian Nights. Be the first one who will review it.