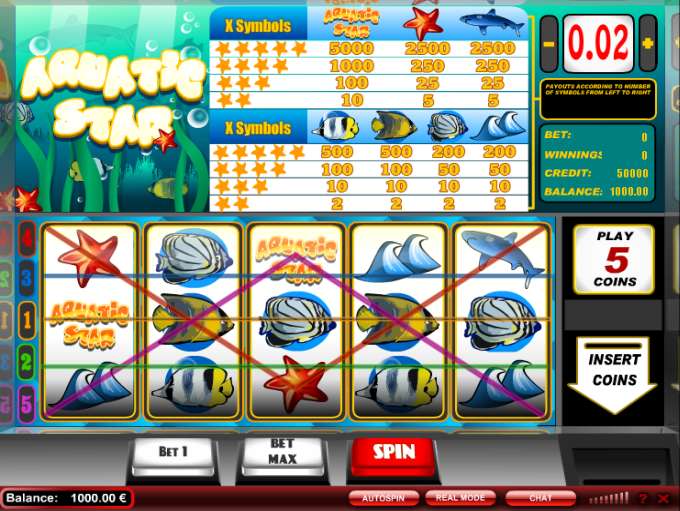 Aquatic Star is a fun-filled slot machine game, and one which is played over a basic 5-reel, and 5-line gaming structure. Players can spin the reels of the slot with 1-5 coins per spin, and those coins can be adjusted as you see fit. Coin denominations stem from 0.02 up to 2.00 in total, so maximum stakes are pegged at 10.00 per spin. The Aquatic Star slot machine game is based on sea life, with some of the many symbols which appear on the reels consisting of waves, sharks, tropical reef fish, starfish, and the game’s title logo. Aquatic Star can see players easily able to win as much as 5,000 coins if they play their cards right. Special features are few and far between, though.

Although the Aquatic Star slot contains plenty of decent paying symbols and is built over a 5-reel, 5-line structure, it is not really a true video slot. There are no scatter icons, no special symbols, and more to the point, no special features. Even wild symbols don’t make an appearance in this slot machine game.

Given that, players are going to have to rely on the standard paying symbols to pocket a win. Players can use the tropical reef fish icons to pocket wins which range from 2 up to 500 coins, whilst the shark and starfish symbols can see players win as much as 2,500 coins. Winning symbols count if just 2 appear on a payline, as opposed to most other video slots which require 3 such symbols.

Truth be told, Aquatic Star would be considerably more enjoyable if there were a few special features worked into the slot’s design. There isn’t, though, making this iSoftBet developed game very much a take it or leave it deal.

Currenty there are no reviews for Aquatic Star. Be the first one who will review it.