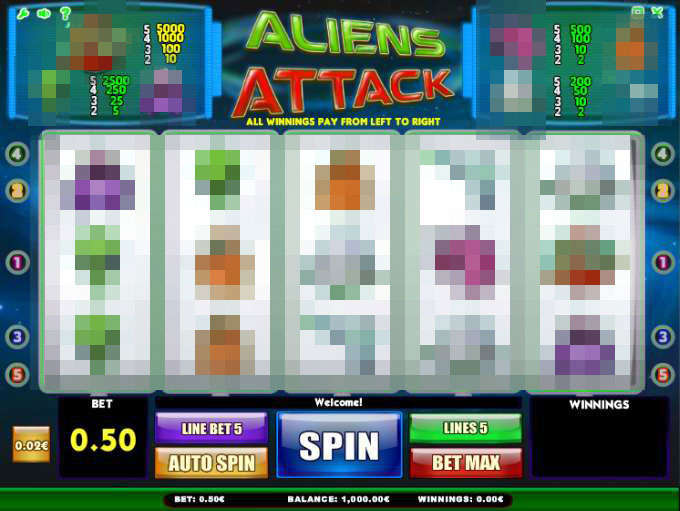 iSoftBet is the design house that is responsible for creating the colourful, rather strange creatures represented in Aliens Attack. This is a five reel, five pay-line slot that offers a generous top base game prize of 5000 coins. iSoftBet is a reputable European developer that has been churning out games such as this to the online casino gaming industry for a number of years.

Sometimes the simplest of slots hold the most appeal to players. Alien Attack promises tons of entertaining fun with some colourful, imaginative characters. Most people are intrigued by the concept that sentient life exists in other parts of the Universe, as well as being intrigued at what they might look like. iSoftBet designers have given it their best shot, and come up with some super strange characters that are certainly more fun than scary.

The highest paying icons is a cute three-eyed purple people eater. Just kidding! But there is also the archetypal little green guy with black slanty eyes, orange fellow sporting three legs, and a pink…I think…elephant kind of being. A flying saucer is also an icon, and this slot would seem remiss without one of these iconic flying machines, and a laser gun or other such alien weapon. The Aliens Attack” logo embossed over a ringed planet concludes the symbols being used.

Pay tables are portrayed at the top of the reels, and reels appear to be set into a window which looks out on space. All wins are paid left from right, and betting takes place on one, two, three, four or all five lines. It is very affordable to play across all five lines as a wide coin range is available. The coin bet value commences at 0.02, increasing through various options up to a top wager of 2.00. As five coins per line may be spent, this would make the maximum wager a total of 50.00. Auto-spin can be used, but not set to stop after a certain amount of spins, so, should this toggle be used, keep an eye on it.

Sadly no bonus feature is on offer in this simple video slot. While it does not offer all the bells and whistles of bigger games in the same genre, it is still very entertaining to play. It is well worth a few spins, especially for those of us who enjoy this theme.

Currenty there are no reviews for Aliens Attack. Be the first one who will review it.