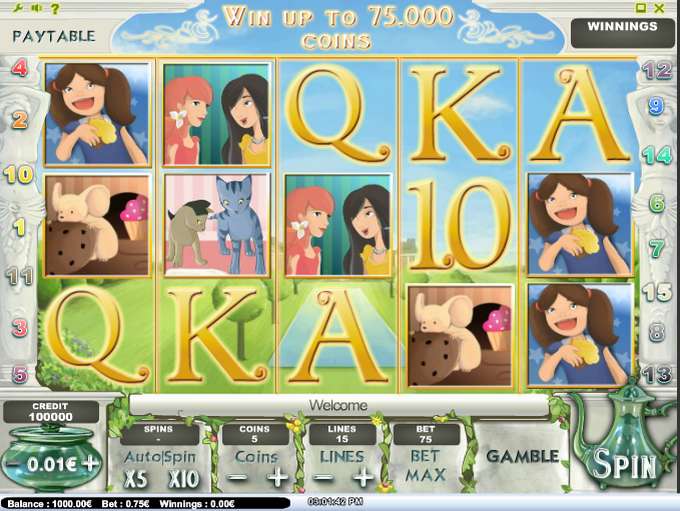 We honestly cannot think of anything worse than sitting down for an afternoon tea party. How on earth this theme has got itself attached to a slot machine is also beyond our ability to understand. Afternoon tea parties are serene, and slot machines quite the opposite. Perhaps the marriage of the serene and the exciting, makes for a calmer, more sickly type of excitement?

Nevertheless, iSoftBet have scraped the bottom of the barrel in terms of the theme, graphics and so on, but there is a relatively attractive prize to be won across 75 000 coins. If you are at all interested, this is a five reel, fifteen pay line video slot, with a coin size range of between 0.01 to a surprising 0.50. A maximum of five coins per lines is allowed, making the maximum wager 75 coins.

Graphically rendered perhaps like a six year olds’ “paper dolls” game, we don’t find anything in Afternoon Tea Party that gives us a personal thrill. No flashing lights, 7’s, bars of gold, glitz and bling. It is all pretty pastels, pussy cats, and little girls grinning with delight at their afternoon’s entertainment.  It is absolutely horrible, and decidedly…excuse the pun…not our cup of tea. Whatever were these developers thinking, iSoftbet generally creates quite hot slots? I think the developer of this one, might have been a woman suffering from PMS, or a man with absolutely no handle on how to entertain slots fans.

Other icons include the girls grandma, a cupcake eating mouse, the Afternoon Tea Party Logo, teacups and saucers, and a cake induced bonus symbol – teacup and saucer is the scatter, and the grandma is wild…just kidding…the wild is the Afternoon Tea Party logo – and that is what we really call wild!!! The balance of symbols are normal playing card indices, and ambient sounds are equally as horrible as the graphics of this game.

The only strategy to use when you are thinking of playing Afternoon Tea Party is – DON’T DO IT – it is guaranteed to drive you insane! We don’t care how large the prize is it would never entice us to put another coin in it ever again.

If you ever get as far as reaching the bonus feature, which we somehow doubt! You will be required to ice some cakes. Even the bonus round is a sickly sweet as the rest of this slot, which features girl guides gone even gooder.

Currenty there are no reviews for Afternoon Tea Party. Be the first one who will review it.