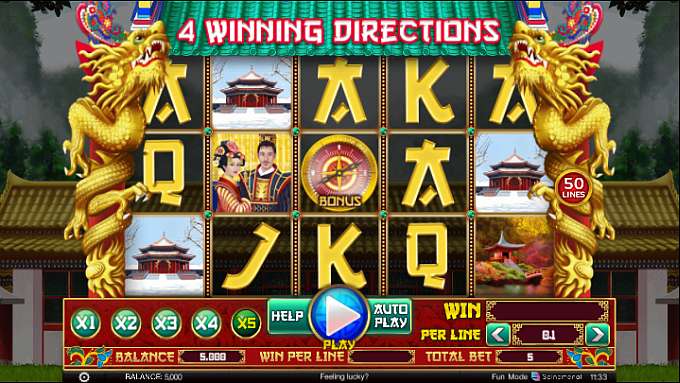 This game is currently unavailable
Please see other games from the same category.

4 Winning Directions is an oriental themed slot developed by Spinomenal. The game comes with a 5 by 3 set and features 45 paylines. The Asian themed slot also features special features such as wilds and scatters. The game features a betting range aimed at accommodating a wide spectrum of gambling preferences. The wagering limit begins from as little as 0.50 credits to 500 credits. So whether you are on a shoestring budget or with a fat bankroll, you will find a range that accommodates your budget.

The oriental themed slot can be played across a wide range of devices cutting across mobile, tablet, and desktop operating systems.

Once the game loads, one of the first things you will notice is its oriental nature which is written all over the slot. From the design elements to symbols used in the game, the designer did not spare any opportunity to integrate features that align with the theme of the game. Symbols used in the game can be categorised into three grids. The upper grid consists of special symbols such as wild and scatter symbols while the middle grid consist of valuable symbols such as the symbol of an Asian couple, as well as an oriental temple. The low value grid consists of the usual playing card symbols.

You will need to land a matching combination of symbols on the reels to win a reward in the game. The value assigned to symbols involved in a winning combination will determine the prize won. The symbols of Asian couples are the most valuable of the regular symbols. Land the maximum combination of these symbols and you will be credited with 200 credits.

The special symbols of the game come with unique prizes and rewards. For example, the wild symbol of the game which is represented by the symbol of the green dragon will reward you with 200 times the value of the line bet for landing a matching combination. The bonus symbol which is represented by a compass is the key to activating the special wheel season while the phoenix free spins pictogram will usher you into the free spins round.

Land three or more free spins pictograms and you will be ushered into a mini game where you have to choose one of two options. One of the options is represented by the Tortoise and is characterized with sticky wilds while the other option is to seek the help of the white tiger.

To activate the bonus round of the game, you will need to land at least three bonus icons. If you are lucky to pull this off, you will be ushered into a secret chamber where a compass is kept. The compass consists of four directories each of which has three parts. In this round, each spin begins with a randomly chosen cash prize.

Currenty there are no reviews for 4 Winning Directions. Be the first one who will review it.