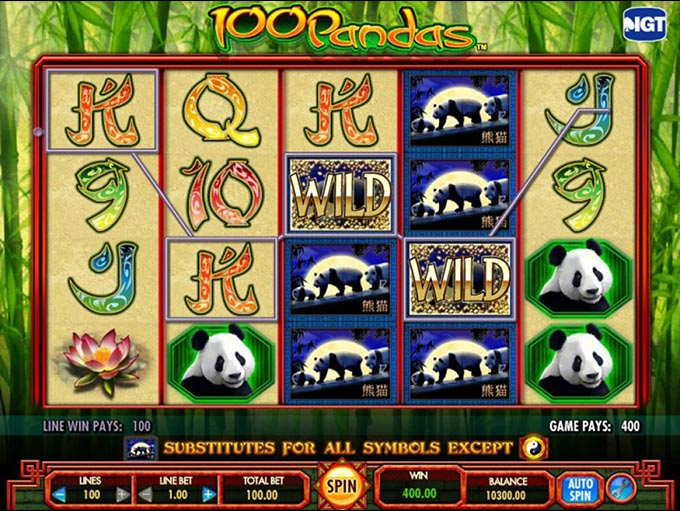 International Game Technology (IGT) is the software developer responsible for producing 100 Pandas. This is a five reel, one-hundred pay-line slot based on the black and white bear we all love. With 100 pay-lines to consider, it is at least good to know that we can place a wager of 0.01. That is for a total of 1.00 to have all bases covered, but we are also able to put up the price, for players who are willing to risk a little more money. The maximum wager per line is 30.00, which is a rather large bet, all things told.

There are a great many special features starring at 100 Pandas, not least of which the beauty of the graphic rendering of this bear. It is a follow up slot to the iconic Wolf Run, where the developer as stuck with an animal theme. It is just as precious to play as its predecessor still is. This game also offers a bonus feature, and we believe that all types of player will enjoy giving these reels a whirl.

Chinese themes have been widely incorporated into this game, because as we know, the Panda originates from the central western and south western regions of China. Symbols besides this endearing bear set against various backgrounds, include; bamboo shoots, a Ying Yangbakwa, lotus flowers, and regular playing card indices rendered in a Chinese-type font. Difficult as it might seem to comprehend this, three of the Pandas are wild. That is where three pandas as displayed on a single icon, against the backdrop of a full moon. These wilds substitute for all other icons, except the scatter symbol which is the Ying Yang sign. Wilds also stack during normal game play which enhances the chances of winning.

As is normally the case in slots, the scatter icon is responsible for triggering the bonus round. This round takes the form of a Ying Yang Free Spins Bonus where it is possible to run up as many as 225 free spins. Essentially free spins may be re-triggered time and again, which multiplies the chances of winning over and over again. Line this icon up on reels 2, 3 and 4 for a generous ten free spins, together with a 2 x multiplier! The ability to re-trigger up to 255 free spins makes for massive winning potential.

Currenty there are no reviews for 100 Pandas. Be the first one who will review it.