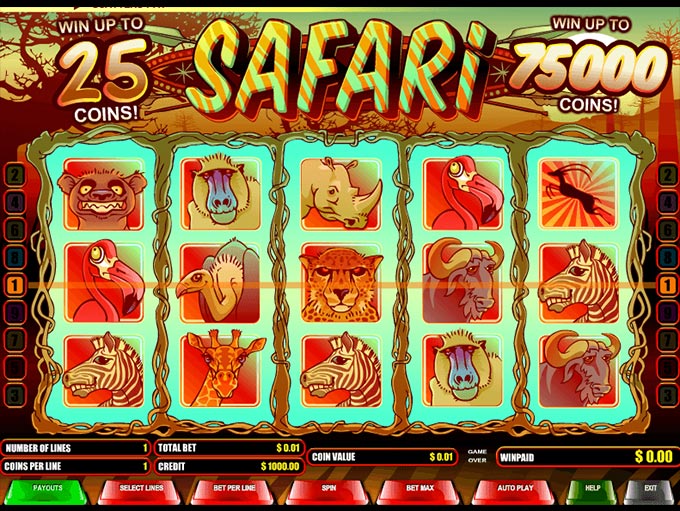 Safari has been developed as an easy-to-grasp, animal-themed slot, just like its title suggests. B3W haven’t put too much effort into making the game stand out, although they have put quite a lot of work into making the game cheap, so it is something of a low-rollers paradise. Safari features just 9 lines, and all 9 lines as well as the coin values, and the number of coins you stake per line are all alterable in this game. Floor bets cost just 0.01 per line per spin, and it is impossible to get cheaper than that. If you do wish to push the boat out, you can wager as much as 9.00 per spin, so even a maximum stake isn’t going to do serious damage to your finances. Safari does offer up a non-progressive prize worth around 250x your total bet, which isn’t too shabby at all for a simple non-progressive jackpot slot such as this.

Wilds and scatters have been included in the game, although there is no real bonus round of which to speak.

Wild symbols appear as antelopes (which are also the best paying symbols in the slot) and these can substitute for all other icons (save for scatters) to help players land winning combinations on the reels of the game. Players who land wins with wild symbols assisting along the way will pocket 2x multipliers on those winnings, courtesy of the wild symbols.

Scatter icons appear as cameras, and these symbols count no matter where they land on the reels. It is worth pointing out scatter icons can deliver decent enough wins, up to 100x your total bet if you can land 5 of them on the reels of the game.

There are no other bonus features included in this game, which is a bit of a shame if we’re being honest. However, as we mentioned earlier, B3W spent more of their time trying to get this slot to be as cheap as possible for low-rollers, and including any special features at all would likely have seen the wagering range rise, which isn’t what low-rollers want.

Currenty there are no reviews for Safari. Be the first one who will review it.