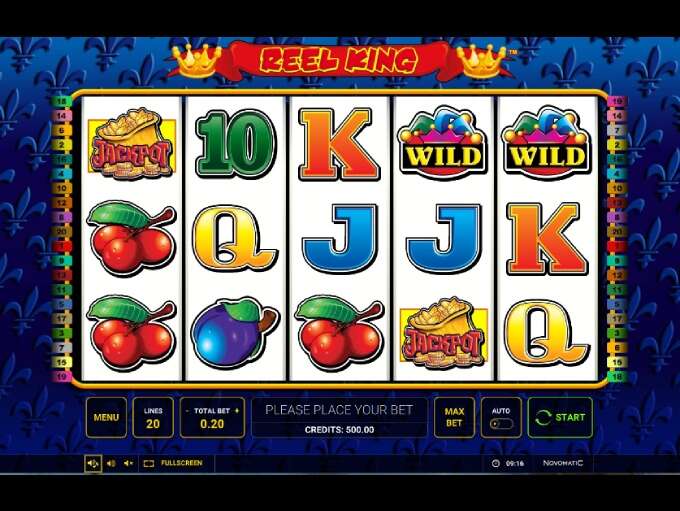 Novomatic’s Reel King is the quintessential slot for players who like a touch of retro gameplay in their slot gaming. This video slot features a wealth of classic slot imagery, including high playing card icons, fruit, and plenty of sevens. Played over 5 reels and 20 lines, the slot looks as though it is a fruit machine, although it is one which comes with the special features one would commonly find in a video slot. Having a spin on the Reel King slot can cost as little as 0.01 per line per spin. If you wish to flesh out those bets, though, you can wager up to 100.00 a spin. Unfortunately, the RTP (return to player) rate is a little below par at 94%. However, the non-progressive jackpot is decent, standing at 500x a total bet.

Wild symbols are easy enough to spot in this release. These appear as jester hats, and although they cannot pay out cash prizes, they can substitute for all icons to help form winning combos. There are no scatters icons in this game, which makes things a touch easier for players. Wild symbols can only show up on the third, fourth and fifth reels of the slot.

This slot does contain a gamble feature, like most of Novomatic’s slots. After triggering any win on the reels, players have the option of turning on this feature. It can see players able to choose either a red or black card. If they successfully predict the colour of the next card in the sequence, they will double their winnings. Guessing incorrectly will see recently won prizes lost.

A secondary bonus feature is playable in this game. It is known as the Reel King feature, and it is triggered entirely at random following any spin.

Once the Reel King feature has been triggered, one of the reels will turn into a special reel. This will only display “sevens”. Every spin you have on these special mini reels will dish out wins until a black diamond pops up on the reels. Those symbols will terminate this bonus round. The bonus feature is always triggered at random but can appear on both winning and non-winning spins. Surprisingly, it appears quite frequently on the reels of this game, too. A nice little add-on, the Reel King feature adds a little gloss to this release.

Currenty there are no reviews for Reel King. Be the first one who will review it.