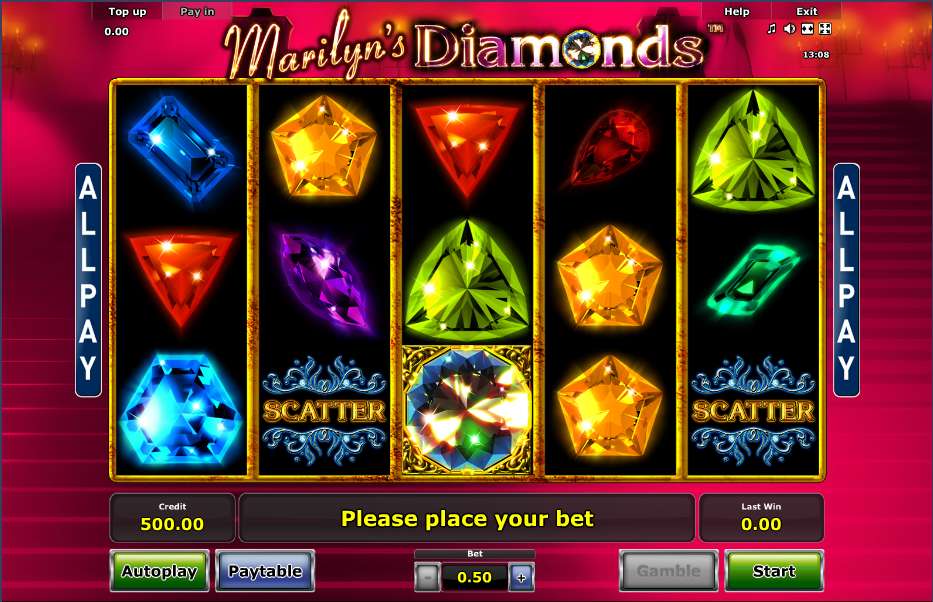 Marilyn Monroe has been the subject of a number of slots from gaming software heavyweights, Novomatic. The above game is the second slot from Novomatic inspired by the 20th century sensation. The reason for this is not farfetched – Monroe was one of the most controversial personalities of the last century. So much was her influence that even her death had an impact in the world she left behind – suicide rates surged and newspaper sales skyrocketed.

On Marilyn’s Diamonds, the controversial star makes a comeback on a five-reel set with more than two hundred ways to land winning combinations. The game features a bounty of rewards from wilds to scatters. What’s more, this slot comes with a tumbling-reels phenomenon that makes the symbols of a matching combination disappear and get replaced by more symbols. However, this Novomatic slot does not come with free spins or bonus games.

First off, the quality of the graphics consolidates its elegant theme. With a name associated with diamonds you can probably tell that this slot will be loaded with such symbols. But these aren’t the most valuable symbols of the game. The most valuable symbols of the game are the wild and scatter symbols. The game’s scatter is represented by the scatter signature designed with fine ornaments.

The game’s wild is represented by a symbol depicting Marilyn which substitutes for the standard symbols of the game to form winning combinations. But perhaps the most exciting symbol of the game is the refill feature where symbols involved in a winning combination disappear and make way for new ones to take their place. Each time symbols form a combo, the icons involved disappears and new ones fall in to take their place. This augments your winning prospects significantly.

One of the unique features of the game is the cascading reel trigger. When you land a win, the jewels from the top reels fall to create additional combos. This means a single win could snowball into three or four. Then there’s the game’s scatter (which is the symbols labelled scatter) which activates a special bonus if at least three show up on the reels.

Currenty there are no reviews for Marilyn's Diamonds. Be the first one who will review it.