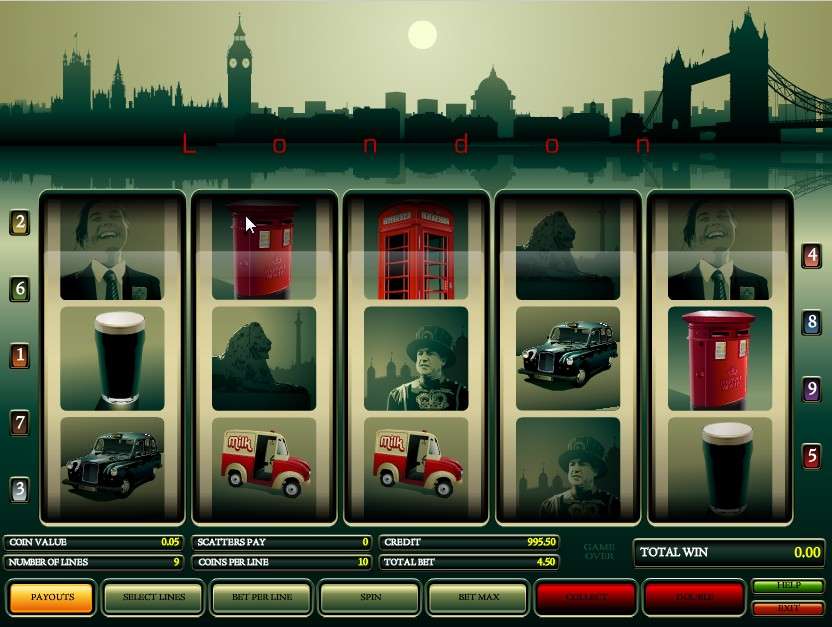 Many of the famous features of the renowned city are part of London, the slot created by the game developer B3W. As you play the game, you’ll see the city as it stretches alongside the Thames River at dusk or perhaps dawn. Several famous structures can be seen at the top of your screen, including the Tower Bridge and Big Ben.

London is a game with five reels and nine paylines. You can choose to play as many of the lines as you wish. You can play each line for as little as 0.05 or as much as 2.00. You can play as many as ten coins on each spin. The minimum bet is just 0.05 and the maximum is 180.00 a spin.

Not only will you see many of the famous landmarks of London when you play this game, you’ll also see some of the people associated with the city. These includes a stern-looking Bobby, a Royal Guard and another well-dressed gentleman with a serious look on his face, apparently a barrister. There is also a fellow with a big smile on his face, possibly a London Twit.

Among the famous London sights spinning on the reels are a double-decker Bus, a red Telephone Booth and a Milk Truck. There is also a Taxi as well as a traditional Mailbox. You’ll also see the famed image of a Stone Lion.

There are also special symbols in the game, including a tall glass of Stout. It is the game’s Wild symbol and substitutes for all symbols except the Scatter. When it is part of a winning line, the payoff is doubled.

The Scatter in this game displays the famed sign directing you to London’s Underground. If you get at least three of them, you will get to throw dice in the London bonus game. Each throw wins a prize. If you got five Scatters on one spin, you’ll get five throws. Four Scatters gets four throws and three of them give you three throws.

The glass of Stout symbol is not only the Wild symbol but also the key to winning the London jackpot. If you can get all five on one payline, you will win the game’s biggest prize, which is 1,250x your bet.

Currenty there are no reviews for London. Be the first one who will review it.