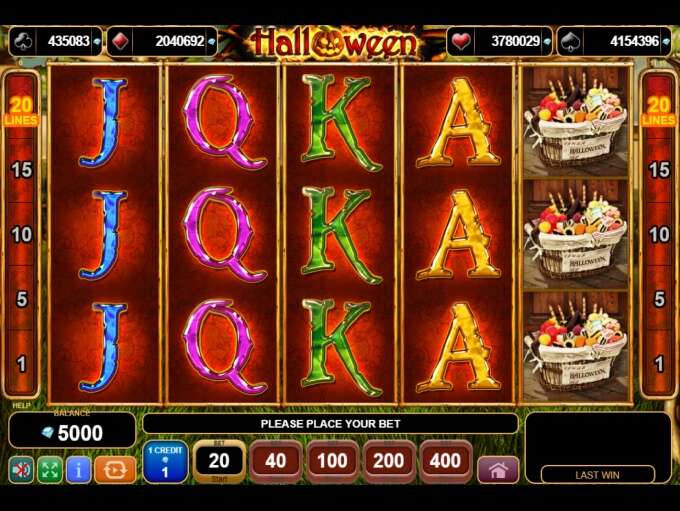 Halloween themed slots are normally either very cheesy, or over the top with ghouls and goblins, witches and vampires. This Halloween themed slot is different. Simply entitled Halloween, this one focuses more on a more traditional sense of the occasion. The video slot itself is played over 5 reels and there are 20 paylines upon which you can bet. Coins are fixed at 1.00 in value in the Halloween slot, so at the cheapest, you can expect to play Halloween for 1.00 per line, per spin. At its most costly, the slot can set you back roughly 400.00 per spin. If that seems a little excessive, then you should probably know that there are four progressive jackpot to be won in this EGT developed slot.

The scarecrow makes an appearance in the slot – an image which is usually overlooked by other, similarly themed slots. The scarecrow is a wild and it can substitute itself for all other icons, save for the pumpkin and scatter icons. The pumpkin (or Jack o’ Lantern, if you prefer), is another wild symbol. It only appears on the fifth reel, and turns all symbols into wilds, barring the scatter.

Should a player land three scatter symbols on the second, third and fourth reels, then they will trigger a free spins bonus game, as well as pick up scattered winnings worth 2x their total bet. In the free spins bonus, players are treated to 10 free games, with all winnings being multiplied 2x their normal going rate.

If you’re a gambling player, then you can gamble winnings worth less than 700 by clicking the appropriate button after a spin. A word of warning though: the gamble feature offers you a 50% chance of success, which isn’t actually that high.

Now, to those four progressive jackpots which we mentioned earlier. In order to trigger these, players are going to have to hope that Lady Luck is on their side. These four progressives are offered via the Jackpot Card Mystery Bonus, and that is triggered randomly. In this bonus, players must match up three suits from a set of 12 cards. If they find three cards in the same suit, then they will win one of the four progressive jackpots. The jackpots are organised into suits too, so what suit you have, correlates to which jackpot you have won. It is all pretty simple to work out.

Currenty there are no reviews for Halloween. Be the first one who will review it.