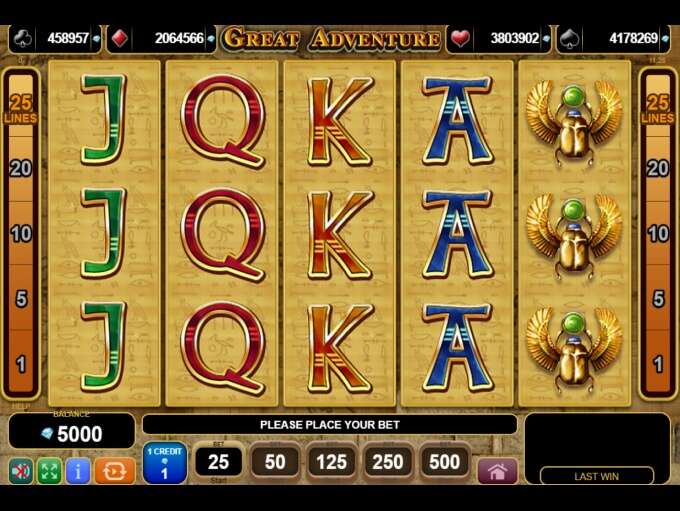 It seems that every developer wants that kind of Indiana Jones themed video slot in their arsenal, and apparently, EGT aren’t any different. Great Adventure is that slot. Although most of the symbols in this game (including the high playing cards) are somewhat Ancient Egyptian in fashion, there is still an air of exploration about this title, which contains 5 reels and 25 paylines of action. Great Adventure slot is moderately cheap to play, with coin values fixed at 1.00. You can turn on as much or as few paylines as you wish, which gives Great Adventure a floor bet of just 1.00 per line, per spin. On the other hand, its maximum wager can set you back up to 500.00 per spin.

The special features that feature in Great Adventure are strange. For instance, there is no definitive wild symbol. Let us start with the scatter then. The scatter is the book icon. When this symbol appears 3, 4 or 5 times in any position on the reels, the player will pocket scattered wins of 2x, 10x or 100x their total bet. However, they will also be given 3 to 10 free spins for finding 3 or more scatters.

With these free spins, the wild icon appears. Some of the standard paying symbols will be transformed into random wilds, and those wilds will be available for you to win big money with. Wilds only make an appearance in the bonus game, and not in the base game, though. That is a bit of a shame.

Should you find yourself on the receiving end of a win worth less than 875, you can decide to gamble your winnings. Players must pick either a red or black card. The outcome of this gamble will either see a player double their winnings, or lose them.

There are four progressives spinning about on top of the reels, and these can be won at random. A player could find themselves taken to the Jackpot Cards Mystery Bonus at any moment in the slot. Once there, they must match three cards of the same suit from a total of 12 cards that appear on the screen. Once they have matched three cards of the same suit, those cards will be used to determine which of the four progressives jackpots you have won. What could simpler than that?

THE BEST VIDEO SLOTS MASHIN IN THE WORLD