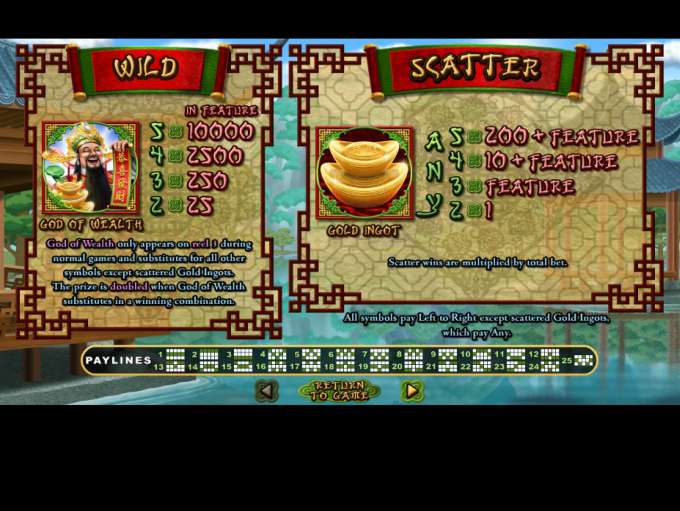 New Customer Offer. T&C’s Apply. 18+. The Promotion consists of one (1) 125% match bonus up to $1,250, and is valid only on a player’s first deposit; it consists of two (2) subsequent 125% match bonuses up to $1,250 each, valid only on a player’s next two deposits.The deposit bonuses are only available by using Bitcoin or Bitcoin Cash. Bonus funds cannot be used for play on Live Dealer games.

About God of Wealth

This RTG (RealTime Gaming) developed video slot is based on oriental culture, and is quite similar to many other similarly themed slots out there on the net in terms of imagery. God of Wealth is actually a progressive jackpot slot, with its top prize tending to pay out at around the 3,000 to 5,000-coin mark. That shouldn’t really surprise you, though, since most RTG developed slots have similar scales when it comes to their prizes. God of Wealth is played over a 5-reel, 25-line structure, and allows players to adjust the speed of their gameplay, too. The video slot allows players to alter the number of lines they wish to play with, as well as the value of their coins, which can see total bets stems from 0.25 per spin, up to 6.25 per spin in all.

The God of Wealth himself is a wild symbol in this video slot, and he can substitute for all other symbols in the game, barring scatter icons. The wild symbol is also the best paying symbol in the slot (excluding wins from the progressive jackpot, of course), being worth 10,000 coins if you can land 5 on any active line. Wild symbols only count as substitute symbols when they appear on the third reel during the base game, but they will double the value of all winning combinations in which they appear.

There is nothing you can do to trigger the progressive jackpot. It is triggered at random after any winning or non-winning spin.

The bonus feature in the God of Wealth slot is a free spins bonus. Once players land the feature, they can click on one of the golden ingots to learn how much free spins they are going to start the feature with. Up to 10 free games can be won in all. During the bonus, the God of Wealth icon can replace the dragon, ox, and tiger icons only, but wilds do seem to be more frequent during the free spins bonus. Again, though, they only appear on the third reel.

Currenty there are no reviews for God of Wealth. Be the first one who will review it.