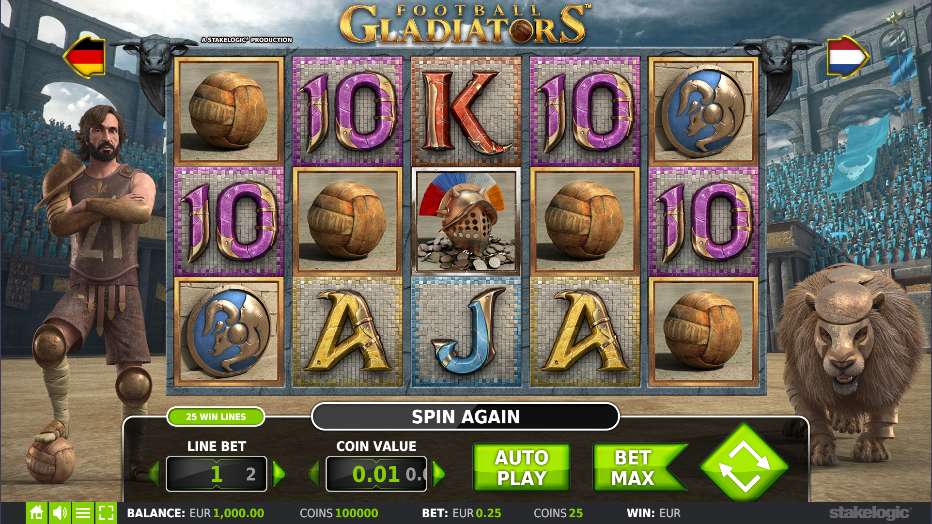 This game is currently unavailable.
Please see other games from the same category.

You might well ask just what Football Gladiators is all about. The truth is, it is something of a fantasy concept, and one which you may or may not like. To each his own, it seems. Football Gladiators can best be described as a video slot which is all about Roman gladiators who fancy a spot of modern football. No, this is not a joke. Funnily enough, players who closely resemble Andrea Pirlo, Robin Van Persie, Rio Ferdinand, and Toni Kroos all been included in the slot. Played over 5 reels and 25 lines, players can choose to wager anything from 1 to 10 coins per line, and have those coins valued at anything from 0.01 up to 0.50 in all. This will see players able to bet anything from 0.25 up to 50.00 per spin in total. The top prize is worth 1,000 coins.

The arena icon is pivotal in this slot. When it appears on the second and fourth reels, then the player will get to choose one of two bonus rounds. They are quite different, and we will discuss each of those at length in just a moment.

But first, onto the highest symbol. This wild icon takes the appearance of whichever football you happened to have picked before the game go going (we have listed them above). Those symbols appear on the first, second, third, fourth, and fifth reel of the game, and can replace all others save for the bonus (arena) icons. Wilds are also the best paying symbols in the slot.

Now for the two bonus rounds. They are known as the Chariot Race Bonus, and the Battle Bonus. In the Chariot Race Bonus, players race against a Dark Knight on chariots. Players can pocket free spins and multipliers with this feature. They must choose whether to race on a small, medium, or large track, to which they will pocket anything from 7 to 15 free spins, with 2x to 5x multipliers.

The second bonus (Battle Bonus) offers an epic fight. Players can choose a beast in the arena, and then players must use the footballers to attack the beasts. Every time a footballer hits the beast, they will win instant cash prizes. This is a simple instant win game, and is not as fun as the free spins bonus round. Nobody could ever accuse Sheriff Gaming of not being original with the theme of this slot, though.

Currenty there are no reviews for Football Gladiators. Be the first one who will review it.