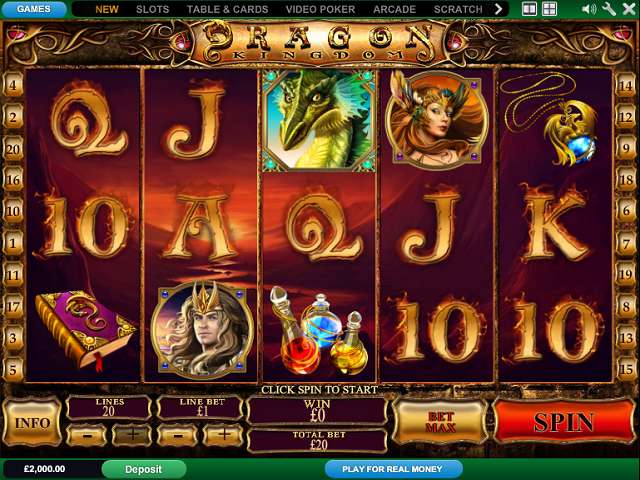 Dragon Kingdom is a Playtech developed video slot, and a rather predictable fantasy themed one at that. Despite its graphics, it has done fairly well in recent years, namely due to its captivating special features. Dragon Kingdom is the quintessential, stereotypical fantasy themed game, with heroes, villains, magic, and dragons aplenty. The slot contains a total of 20 paylines, which are spread over 5 reels. That won’t surprise you, though. What might surprise you is your degree of control over the bets. Players can choose line bets of 0.01 up to 50.00 per line in this game, and turn as many as paylines on or off as they wish. This will bring your total wager to fall somewhere between the 0.01 per line, per spin minimum bet range, and the 1,000.00 per spin maximum stake mark. You can win as much as 25,000 coins with this game.

The dragon (and a rather silly looking one at that) is the wild symbol in this game. When it appears, it can replace all other symbols, save for scatter and split icons. Players are going to want to land 6 dragon icons on the reels to win the non-progressive jackpot, which they can do thanks to the split symbols.

Those split symbols take the shape of a dragon’s egg. They can only appear on the fifth reel. When they do, they will trigger the Dragon Split feature. This will permit 6 of kind combinations to replace 5 of a kind combinations. As just mentioned, you will need this feature to win the non-progressive jackpot.

The bonus symbol is a scatter icon, and it takes the shape of a fantastical world. When this icon appears 3, 4, or 5 times in any positions on the reels, it will offer up scattered wins worth 6x, 66x, or 666x your total bet. Those are certainly some of the most generous scattered wins currently available on the net. Landing 3 or more of these icons will also trigger a free spins bonus game. That bonus round features 15 free games, with the symbol becoming an additional wild during the free spins bonus. You will also get a dynamic multiplier added to your winnings. In short, for every consecutive win you pocket, your winnings will rise by 1x, up to a total of 5x. Given the graphics, the special features really do save this slot.

Currenty there are no reviews for Dragon Kingdom. Be the first one who will review it.