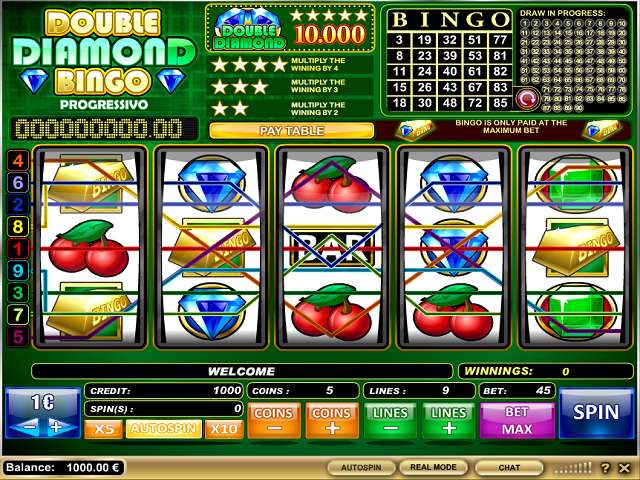 Contrary to what no-one who had played this game might assume, it is not a game of bingo, but an online video slots with a game of bingo as a bonus game, that can only be [played on a Maximum bet. This is another of iSoftBet’s software solutions, and we have been recently taking a good look at quite a few of their games. This slot offers five reels and nine pay-lines, with a maximum prize on the Double Diamond of a whopping 100 000 coins, which makes the game pretty attractive to the typical jackpot chaser.

But that’s is not all as we said earlier on, there is also a bonus bingo game that can reveal a progressive prize. The coin bet range is from €0.10, which incrementally increases up to top bet of €1. Maximum coins per line is five, when played over all nine lines, this means a maximum wager of €45.00, which can work out to be pretty steep. However, there is the option to play in demo mode first to get the hang of the game.

Featured icons are relatively simple, these are Cherries – just like a classic slots game – Bars, Gold Bars (marked BINGO), and Gemstones – obviously Diamonds, Rubies, Sapphires etcetera. The Double Diamond icon is wild, which means that it helps create more winning combinations, but it also provides a multiplier to the player. Land five of these across all five reels and land the 100000 coin prize.

Any strategy for playing slots should include managing money correctly. There is not a great deal to be said other than this. A slot is a random number game, where online the reels are programmed to spin with a random number generator (RNG). This is a valid way to get these machines to emulate what a slot in a land casino will do.

The bonus feature in this slot is obviously the bingo game, a bingo draw takes place every time a maximum bet is placed. As the reels spin, random numbers appear in the draw, and the spin of the reels is somehow tied to producing this draw. We are safe to assume we believe, that if the bingo draw is won, then the progressive prize is won too. Get two numbers correct and win 2 coins, get three correct and win 25 coins, get four correct for a 1% share of the progressive jackpot, and get all five numbers correct to land the PJP.

Currenty there are no reviews for Double Diamond Bingo. Be the first one who will review it.