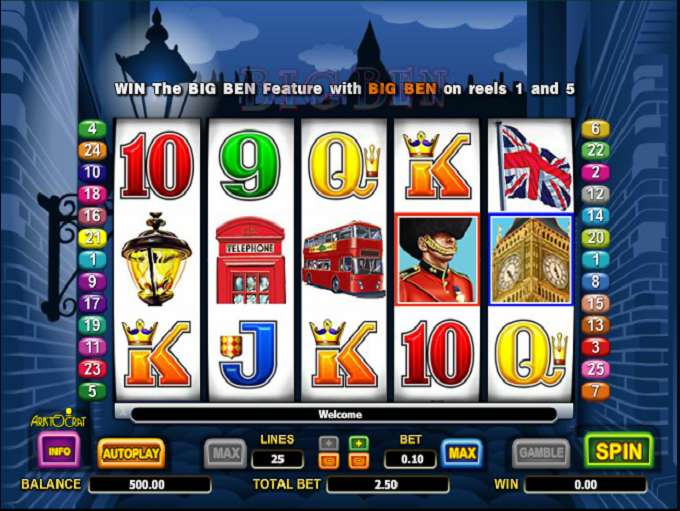 This slot game featuring the famous London clock is, naturally, set in Britain and includes icons that are well-known and timeless. Big Ben itself is spinning on the reels along with many of the other famous features of Royal England.

Big Ben Slots is the creation of Aristocrat Gaming. It has adopted this online game from one that was originally created for land-based casinos. There are very few differences between the original and this internet version. It still has 5 reels and 25 pay lines. You can bet any amount from 0.01- 2.00 on each line. The maximum bet on any spin is 50.00. If you get the best result with the maximum coins and the highest multiplier in effect, you can win 375,000.00.

The familiar sites of London and the UK dominate the reels in Big Ben Slots. One symbol shows the unfurled Union Jack. The glittering Royal Crown is spinning on another. Most of the other symbols show famous London features, including a Double Decker Bus, a Street Lamp and an old-fashioned Red Phone Booth. There is also an old-time Tavern sign, similar to one you might have seen centuries ago.

Though your profits can be greatly enhanced by the Wild symbol, your best results in this game will come if you can land on the Big Ben icon. Not only does it pay well, but it gives you a chance to collect on two different bonuses. The first of these is the Big Ben Feature, which is triggered when the Big Ben symbol appears on both reels 1 and 5. Big Ben will chime up to twelve times and the more random chimes that ring, the larger the multiplier you will win. If Big Ben rings all twelve times, you'll win a 500x multiplier.

The other bonus you can win with the Big Ben scatter symbol is free spins. Depending on the number of scatter symbols you had on a pay line, you'll win either 15, 20 or 25 spins and they can be re-triggered. All of the Big Ben free spins will feature a double payoff.

I love this game, but I can't see what the jackpot is and I can barely see the button to press to spin the reels. How can I fix this?