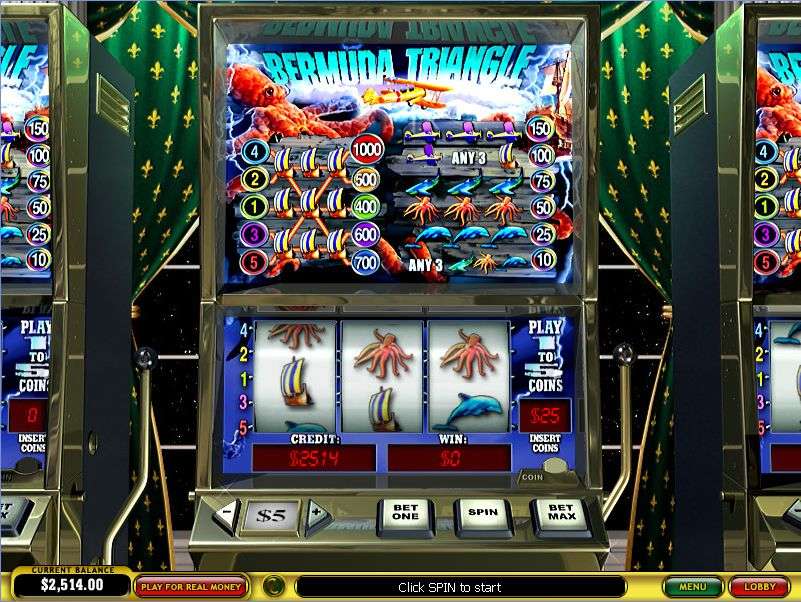 Bermuda Triangle is a simple three reel, five pay=line slot from developer Playtech. Playtech is one of the biggest and best casino gaming developers in the world – they are an Israeli based firm that trades on the London Stock Market and offers gaming opportunities to players in the UK and Europe, as well as the rest of the world where these games are allowed to be played. In other words – in licensed and regulated territories. This slot has a top jackpot prize of 1000 coins on offer, and is a non-progressive game.

The mystery and intrigue that has surrounded the alleged Bermuda triangle, has been a story that has developed over hundreds of years. Everything from pirates to UFO’s have been blamed for the mystery of crews disappearing from boats, planes going missing, and any number of weird and strange happenings in a triangular stretch of water between Florida, Bermuda and Puerto Rico.

Waters here are some of the deepest in the Atlantic, and it makes for an interesting theme in a slot game. Pity that Playtech did not take this theme more seriously and develop it into a more intriguing game with free spins, bonus rounds and interactive levels. This is a seriously simple game where icons used are quite apt, but it really does not offer any special bells and whistles.

Icons used are a dolphin, octopus and shark. Land a mix of these three on an active pay-line for the lowest pay-out in the game. Next comes planes and an AncientPhoenician type of sailing ship. One does wonder what an Ancient Phoenician sailing ship would be doing in Bermuda Triangle waters? That having been said, a mix of planes and these ships will also create a winning combination.

When these ships fill the reels, this allows for the biggest win. This is one thing that is nice about a three reel five line slot, because lines are both horizontal and diagonal, and wins are also paid both these ways. So, if nine of these ships filled the grid and all lines are active, 1000 coins can be won. We do however think that players have as much chance of landing this prize, as they have of going missing in the Bermuda Triangle. A maximum wager costs 25.00, and there are no bonus features in this slot.

Currenty there are no reviews for Bermuda Triangle Slot. Be the first one who will review it.