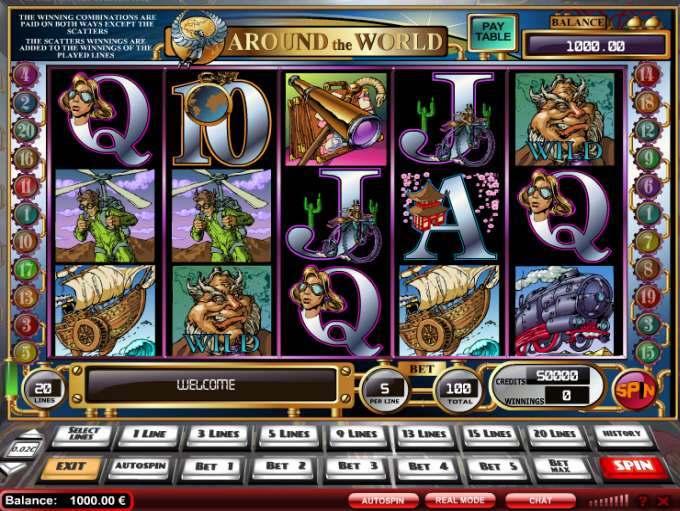 About Around the World

Around the World is an explorer adventure themed video slot, which takes in many of world’s most famous sites. Following an eccentric and fool-hardy explorer as he uses his gizmos and gadgets to get from A to B, this video slot can see players win up to 5,000 coins, via a non-progressive jackpot. Around the World has plenty of buttons for you to sort out your wagers, which range from a low of 0.02 per line, per spin; up to a high of just 100.00 per spin. Around the World promises a multi-cultural gaming experience, set over its 5 reels and 20 paylines.

The old man is Around the World’s substitute symbol. This wild will replace all other symbols that players need to complete winning paylines, with the exception of the bonus, scatter and multiplier icons.

The scatter icon is the golden god. This will award players with scattered winnings when 2, 3, 4 or 5 of them appear on any active payline. The winnings with the scatters are multiplied against the total amount that you have staked.

Then there is the bonus game. The fat blue man icon will trigger this bonus. Should the icon appear 3 or more times, the bonus feature begins. In the bonus round, it is entirely possible for players to land several multipliers on their winnings. This could greatly enhance their rewards from something rather small, to something somewhat more majestic.

Oddly enough, though; the bonus feature in Around the World, isn’t a profitable as the multiplier icons can be in the base game. It really depends on what icons you have on a particular payline when the multipliers appear.

Currenty there are no reviews for Around The World. Be the first one who will review it.