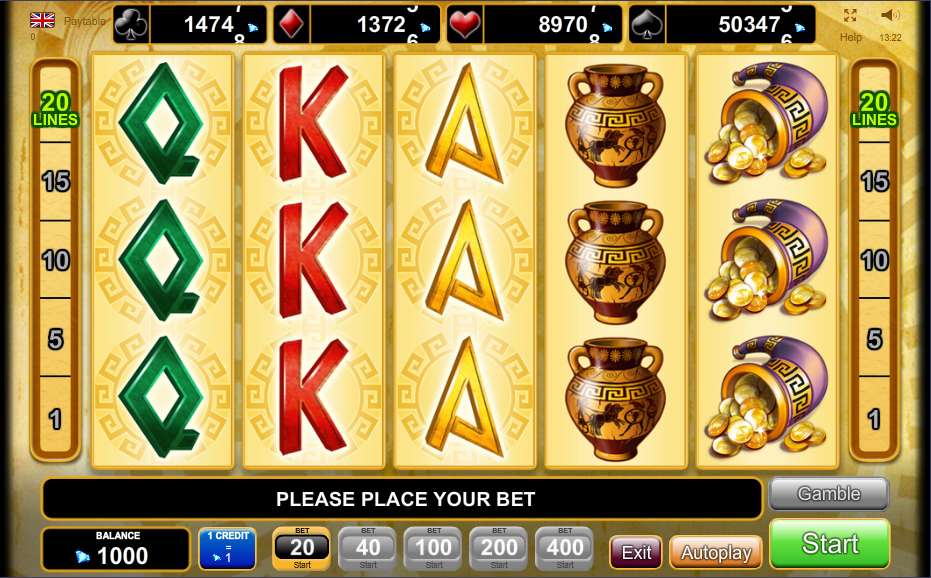 About Age of Troy Slot

Age of Troy is probably the first EGT game we have played that does not feature fruit as icons. This is a five-reel, twenty pay-line game that is networked to the EGT Mystery Jackpot prizes, so is a progressive slot. In game a top prize of 20 000 coins when making a maximum wager.

The Trojans were famous Hellenic warriors, probably made even more famous by the story of Hellen of Troy. She was married to a Greek King, but fell in love with Prince Paris of Troy, who whisked her away from the evil old king to make her his own. This spiked a war that lasted years until the Trojans were tricked by a massive horse inside which the Greek soldiers found entry into their city. Graphic illustrations are good and they animate slightly when involved in a winning combination.

Both Helen and Paris act as icons in this slot, as does the wooden horse which is also the wild icon which is apt as it was the wild card in its day. Other icons include a Greek Temple which is the scatter, Greek war ship, helmet, drinking horn filled with gold coins and an urn. Balance of icons are played by card indices – Ace, King and Queen.

Like all the other EGT slots we have played, this game offers a fixed amount of lines, in this instance it is twenty. The lowest bet that can be placed is 1 credit, so over twenty lines it is 20. Buttons for 40, 100, 200, and 400 activate a higher wager amount. Auto-play is featured, but must be controlled by the player as this does not stop automatically.

As well as a gamble ladder, players may take advantage of a bonus in the form of free spins. When three scatters, plus the wild appear on the reels, twelve spins are given away.  During this game the wild icon stacks which offers many more winning opportunities, and the game plays on a separate screen. The free spins bonus game can be re-triggered, and of course there are also opportunities for winning any one of the four-level Mystery Jackpots. Mystery Jackpots are activated randomly and are available for any sized wager, at any time during the base game. In other words this is not linked to the bonus game, they are separate opportunities to win.