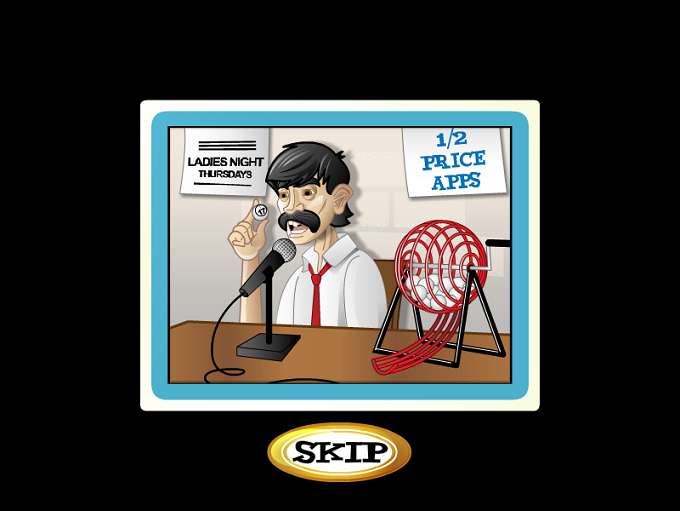 Rival Gaming has put together a great little slot for Bingo fans in Five Reel Bingo. Be prepared for entertainment in this five reel, twenty pay-line slot, with a top in-game jackpot prize of 2500 coins. If all things “Bingo” are the name of your game, this slot has it in spades.

It’s bright, its bubbly and it’s all about fun, fun, fun. Five Reel Bingo opens to an animated introduction of a bingo caller, players, and the rollicking sounds coming from a live bingo hall. After loading an a slot pops up complete with bingo balls numbering the pay-lines, and brightly coloured, animated icons that reward players with even more entertainment when they win.

Icons are the bingo caller, which is the second top prize payer, and old-fashioned bin go ball dispenser that drops a ball on winning combinations; a dabber, bingo card, wads of cash, and a lucky gonk. The top in-game prize payer is the Jackpot icon of a curly-haired gran wearing an “I love Bingo” T-shirt - land five of these on an active line to bring down 2 500 coins. An older gentleman Icon plays the scatter, a gold bingo ball is Wild. Five bingo balls make up the balance of icons. Graphic rendering is simple, and sounds a little monotonous, but then this can be turn off.

When three or more scatters land on the lines, a free spins round is triggered. Drop three for five free spins, four for ten free, and five for a whopping twenty free spins at 3 x multipliers. The wild icon replaces every icon in the game to form winning combinations across any active pay-lines. This only appears on reels one, three and five.

This is a low-rollers video slots with a maximum wager of 50.00, set at a coin betting range of 0.50, at ten coins per line, over twenty lines. The lowest bet is one coin per line, and a coin size of only 0.01 for a 20p wager. However, if the player wants to only play across one line, then they may. Number of lines to play is not fixed.

The bonus game is triggered when five bingo balls line up to spell the word “B I N G O”. No surprises there. Each letter appears on its own reel, so landing a BINGO is not as difficult as it might seem. These are also scatters and can appear anywhere on the reels to get into the bonus game. Unfortunately we were unable to enter the bonus game.