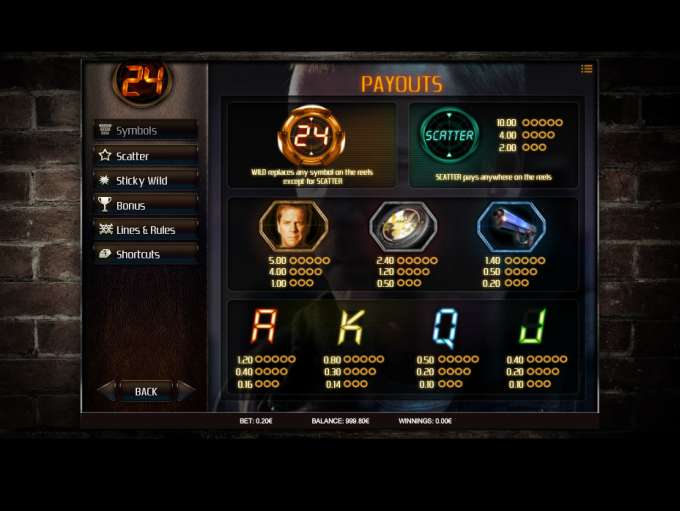 iSoftBet is a London-based gaming software development firm that partners with some of the most successful e-gaming, and land-gaming operators in the world. They have a great reputation in the industry, and 24 comes under license from 20th Century Fox. This is a five reel game with only ten pay-lines, but depending on the size of wager, can win players up to 20 000.00. A whopping jackpot prize like this can make any online slot well worth a spin or two on the reels.

Themed on the film 24 starring Kiefer Sutherland. This game opens and load to a scene of this star of the silver screen aim his gun at the player, which can be a little disconcerting. Players are compelled to step into the shoes of CTU Agent Jack Bauer to take down terrorists. This is a pulse-pounding branded video slot that sees five reels superimposed over the image of Jack Bauer in his favourite position. Holding a gun, and pointing it at some unlucky terrorist. Every now and then we hear his voice speaking some lines from the film.

Symbols are the “24” logo which is also the wild card. This icon can replace any other symbol, barring the scatter which is basically just a dial which says “Scatter”. Wilds are sticky on reels two, three and four, and transforms one to three random symbols into wilds. The scatter pays anywhere on the reels. Jack Bauer is a symbol, as is his special CVTU badge, and a gun is the final symbol. Thereafter – Ace, King, Queen, Jack (how apt?), make up the balance of icons.

Pay-lines are fixe at ten, and wagering takes place with coin values of 0.01, through to 2.00. This is not a high rolling game, but it does have a high rolling top prize. So for a 20.00 maximum bet the player has the potential to land a 20 000.00 prize. It is a very tastefully designed slot, not at all garish or blingy, and is very in tune with its theme.

The bonus game is activated by a timer that counts down on every reel spin. It starts at 24.00.00, but if the player changes the coin size this counter will start again. So be sure to start on a coin size that is comfortable for the players’ budget and continue with this. When the timer runs out, the bonus game starts, and players are able to shoot terrorists for a chance to win instant pays, or the applicable jackpot prize.

Currenty there are no reviews for 24. Be the first one who will review it.