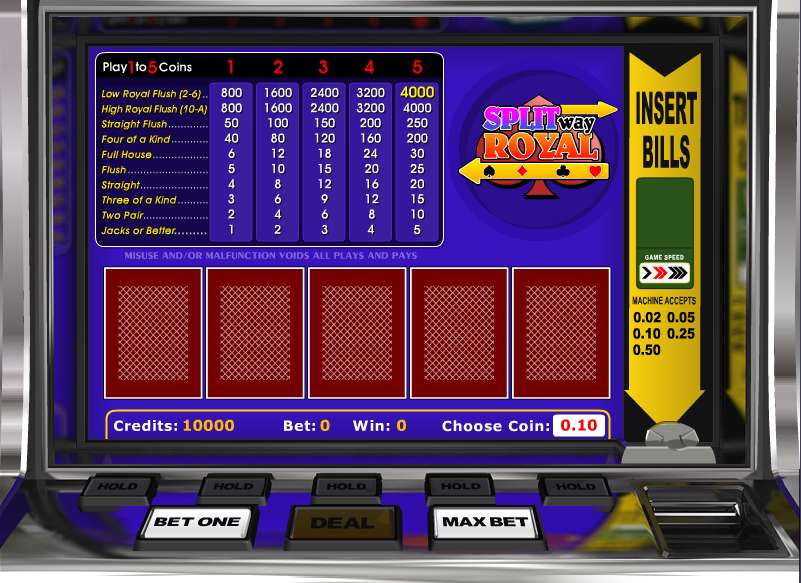 This game of Splitway Royal video poker offers a nice little tweak to the game. It is from the BetSoft Gaming development stable, and offers a 4000 coin top prize. Betsoft is a highly reputable design company, and have been developing games in the online gambling sphere for quite a number of years. They have a whole catalogue of top-tier games to their name, and this is only one of over one-hundred and fifty.

The name of a game often gives away some sort of special feature, and this video poker machine is no different. It is fundamentally a game of Jacks or Better which essentially determines that a player must have a hand of two Jack or better in order to win. However “Splitway Royal” is the clue, which means there are two types of Royal Flush on which we can win the top prize of 4000 coins.

There is a Low Royal flush in card 2 – 6, or a High Royal Flush in the numbers 10 to Ace. Both offer exactly the same sized prize money.Hands in-between the pair of Jack, and Royal Flushes are based on traditional poker hands, starting with – Two Pair, Three of a Kind, Straight, Flush, Full House, Four of a Kind and Straight Flush.

It offers a coin bet range of 0.02, 0.05, 0.10, 0.25, 0.50, and 1.00, which makes it a little cheaper than some games we have seen, to place the maximum wager. One to five coins per game may be place, and to win the top prize, five coins must be place. The coin bet range as well as how many coins are wager is controlled by the player, or they may simply click on the “Max Bet” button. It is a game of one hand video poker which means one deck of cards is played.

A gamble game is one of the bonus features of Splitway Royal, and this is triggered whenever a win takes place. The player is invited to “Double Up?” by selecting a card out of four that is higher than the card dealt. If the player chooses a lower card they lose all their money, but if the player chooses correctly then they are able to double their winnings up to four times. That is on a win of say 10.00, they are able to double this to 20.00, then again to 40.00, then once again to 80.00. Bear in mind that one wrong guess and the player loses everything.

Currenty there are no reviews for Split Way Royal. Be the first one who will review it.