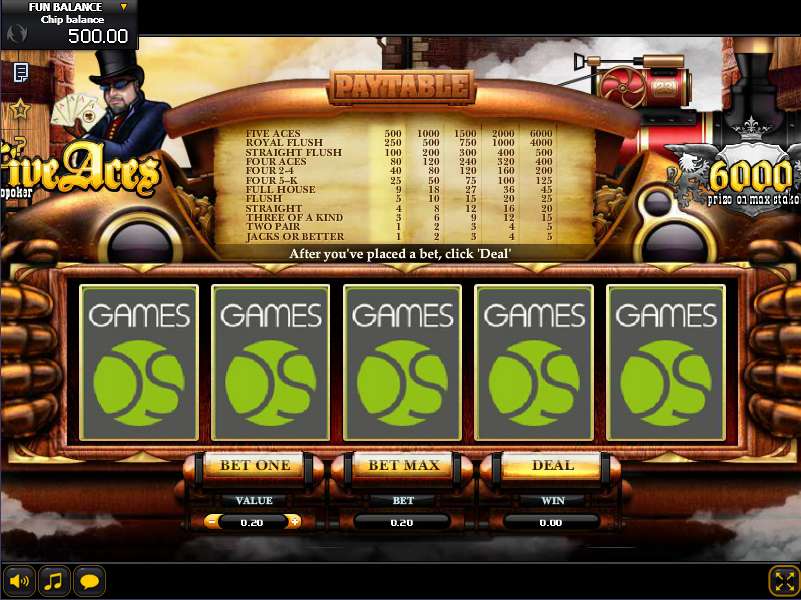 There’s no confusion about what is the objective in this video poker game. Building a hand of five Aces will see you pocket the best pay-outs possible. That much is a given. But what else can the Five Aces game do for you? In many ways, the Five Aces title isn’t actually that unique. It is a simple video poker game, which doesn’t actually contain wilds. Instead, multiple decks are used to provide players with that additional “Ace” that the title boasts of.

As with all gambling games, you must start off by placing a bet. Once your bet has been wagered, five cards will be dealt to you. You must then use your cards to build a top notch poker hand. You can opt to hold as many or as few of the cards as you wish, before clicking on the draw button to replace all cards that you wish to discard. After the draw has been made, your hand is measured up against the pay table, to determine if it is a winning hand or not.

If you have got a winning hand, then you’ll pick up instant prizes. If not, then you’ve lost your bet. If you choose to gamble your winnings, you’ll be taken to a five card selection, where the first card is face up. Here the player must choose from one of the four remaining face down cards. If the card they pick is higher than the face up card, then they’ll double their winnings. Get it wrong, and they’ll end up with nothing. You can double up, up to a total of 5 times.

Most instances of this game have fixed chip values, although some of them can be adjusted in specific sites. Normally, the chip value is valued at 1.00 per coin. Players can wager between 1 and 5 of these coins per hand in this video poker title.

There are some odd hands that you can win in Five Aces. The lowest paying hand is the Jacks or Better hand, and this is trumped by a Two Pair, Three of a Kind, Straight, Flush, or Full House. These can be beaten by hands that consist of four 5s to Kings, or four 2s to 4s. These are beaten by four Aces, a Straight Flush, a Royal Flush, and of course, the top paying hand is five Aces, which is worth 6,000 coins on the maximum bet.

There are some unique hands to play for in this game, but your odds of landing five aces are quite unlikely, indeed. Still decent prizes are present throughout the video poker title.

Currenty there are no reviews for Five Aces. Be the first one who will review it.