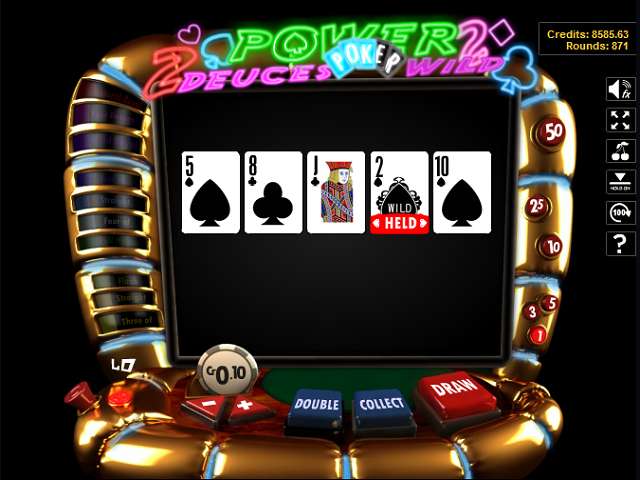 There are many versions of video poker games of the same name, and as the World Wide Web is such a very large place, these names that are in the public domain are used by many different software developers. This game of Deuces Wild Video Poker comes from Slotland, and has a top prize of a multiplier of x 250.

Coming from the Slotland development stable this game has even been made to look a little like a slot. It is set into a sort of fantastic “blow-up” machine type backdrop, something resembling a juke-box almost. Kind of retro, with buttons dotted here and there that control coin size as well as the amount of hands being played. It is also liberally scattered with neon signage, which makes it more exciting to look at. To be honest, we have never seen online video poker displayed quite in this way.

This game offers one deck, three, five, ten, twenty five or fifty decks that may be played simultaneously.Coin size is controlled by plus and minus buttons which change the size of the chip being played. Denominations start at 0.10, and may be increased through 0.25. 0.50, and 0.75. One we go into higher coin ranges a “High Roller” sign lights up, and we are allowed to play with 1.00, 2.00, 3.00, and a top wager of 5.00.

Click on the cherries to the right of the screen to view the pay-tables, and find a 250 x multiplier on wager for landing the strongest hand ranking. This is a Natural Royal Flush, followed by; Four Deuces x 200, Wild Royal Flush x 25, Five of a Kind x 16, Straight Flush x 13, Four of a Kind x 4, Full House x 3, a Flush which doubles the bet, as does a Straight, and Three of a Kind returns your wager.

As is often found in online video poker games, a win will trigger a gambling game. It is up to each individual player as to whether they consider this additional opportunity to double their money or lose it all, a bonus or not. We think it is risky, and should only be played with small wins, but different players are able to deal with different levels of risk. The gamble game is a High Low card deal, where the player is required to choose a face-down card that is a higher rank than the dealers’ face-up card. This gamble can go on indefinitely, but remember the higher the prize, the bigger the loss if one loses.