Vegas Days has a warning, we advise you play at another casino. 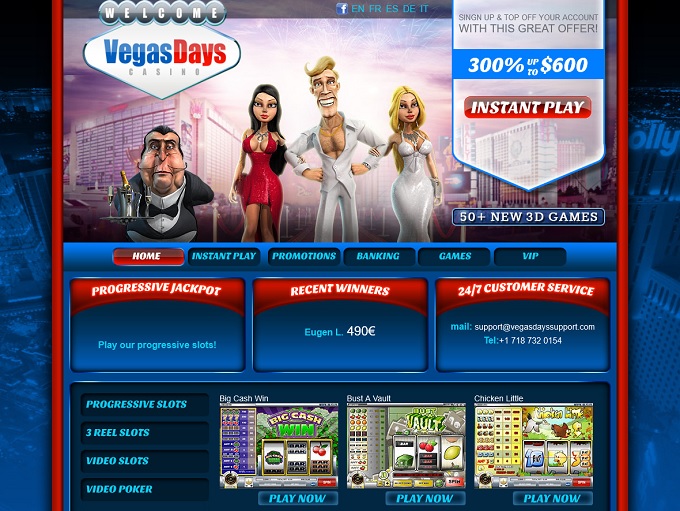 Vegas Days Casino is heavily based on the glitziest gambling city in the world, Las Vegas. The website is operated by Cyberrock Entertainment N.V. and players must be 25 years of age or older in order to join.

The currencies supported are Australian dollars, Euros, British pounds sterling, South African Rand and US dollars which are handled by international money transferers. The banking options are quite limited but respectable at least so players can use Neteller, Ukash, EcoPayz, MasterCard, Visa Electron, Visa or Skrill. Withdrawal options are fewer being bank wire transfer, Neteller, Visa or Skrill. The limit on withdraws are $2000 per day and $4000 per week. This can be used up quite quickly if you’re having a good run as the maximum is $10,000 per month. Hidden amongst the terms and conditions clause which states that all deposits of $/€/£249 or less will have restricted winnings, so be sure to cash out once you have reached 10x the amount you have deposited or else everything else will be lost.

The games use flash browsers and instant play and there is a download option too to access the entire catalogue. So if you’re using a mobile device with a web browser you will not be able to see all the variations that can await you.

Vegas Days runs Rival Gaming software and is owned by TVMUK Ltd. It is part of a group that is well known for making unnecessarily slow payments and has terms that prey on their players’ goodwill. One key example is where a player has accused the casino of changing the terms and conditions of a promotion they were running, directly after he had rightfully won. They claimed that due to the breach in the conditions they were justified in withdrawing all his winnings.

In addition to this the group, Bonne Chance, handles all of the services in one single location for all the casinos that run Rival Gaming software. By not having the infrastructure to support such a large player base this causes players to receive their money in timeframes way above normal.

Due to these actions, they have been blacklisted by many online review sites.

Vegas Days has kept their offering manageable with 80 games to choose from and slowly growing on a monthly basis. Slots make up the majority of the playlist that have entertaining differences for casual players and sophisticated spinners. Big money can be made on the progressive slots but the classic slots are less overwhelming. Interactive slots are becoming more popular due to their drama like storylines. Vegas wouldn’t be Vegas without its assortment of table and card games.

Currenty there are no reviews for Vegas Days. Be the first one who will review it.