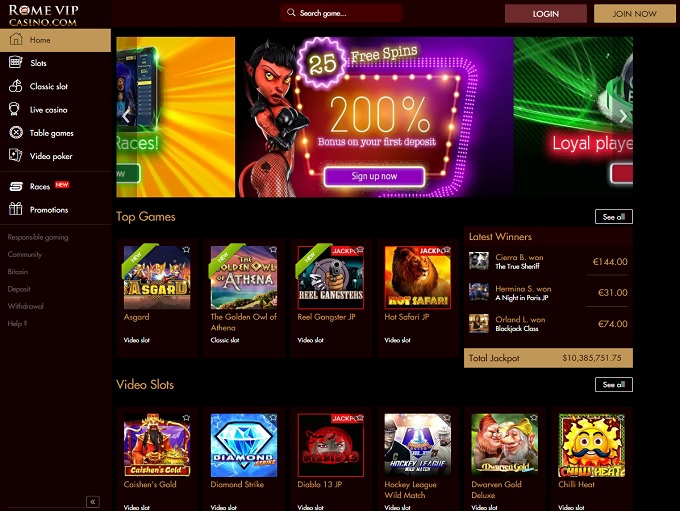 Rome VIP Casino (formerly known as Rome Casino) have reinvented themselves since their previous online casino site closed in 2014. Even so, there are already problems mounting up for the latest incarnation of this casino. Like its predecessor, Rome VIP Casino doesn’t display any serious licensing information, and it is picking up criticism for the way it handles its bonus terms and conditions as well as delays in paying out players.

The online casino is known to accept deposits made using VISA, Bitcoin, MasterCard, UPayCard, EcoPayz and Flexepin, although since this casino is currently blacklisted as a rogue and sketchy casino, we wouldn’t advocate depositing any funds at the site. Customer support is on hand via FAQ and e-mail. The FAQ is bare bones stuff, and the support team take ages to reply. When they do reply, their help is minimal at best.

Rome VIP Casino offers plenty of promotions to players, but the terms and conditions are something players may wish to read thoroughly - very thoroughly, in fact. A 400% bonus is available, spread over the first three bitcoin deposits that a new player makes, but precious few details about what it involves are available at the casino.

Other promos are plentiful, and truth be told, not all of them have terrible terms and conditions. These deals include further deposits offers, races and tournaments, monthly promotions, loyalty cashback offers, free spins, and special table game deals. Again, we’d advise any players to read the terms and conditions of each of these bonuses carefully before claiming them.

If it weren’t for the other dubious aspects of Rome VIP Casino, we’d generally say that this casino is worth a look. They certainly have a good array of games. Those games include renowned slots, live casino, classic slot, table games, video poker and bingo games, as well as tournaments featuring many of those titles. Rome VIP Casino’s slots and table games come from the likes of Pragmatic Play, BetSoft Gaming, Octopus Gaming, Habanero and Vivo Gaming.

While live dealer and table games will have their takers, slots form the largest collection of games at the site. Notable slot machine games you may wish to try include Chilli Pop, The Golden Owl of Athena, Under the Sea, Jumbo Joker, Stampede, Magic Shoppe, Ogre Empire, Reels of Wealth, A Night in Paris and more.

Currenty there are no reviews for Rome Casino / Rome VIP. Be the first one who will review it.