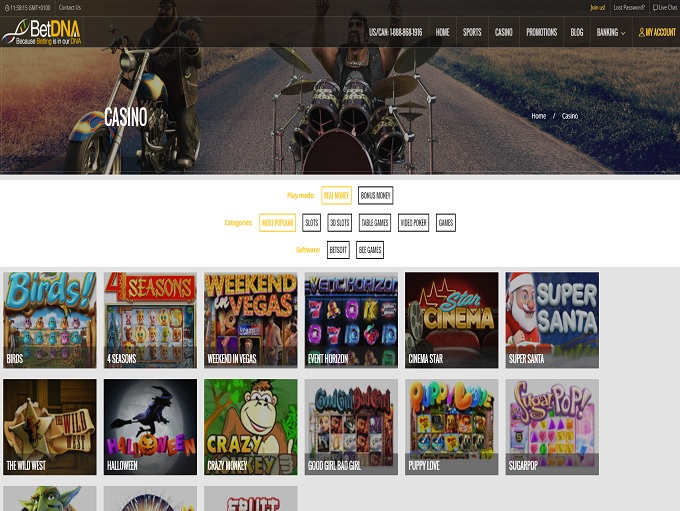 At first glance BetDNA looks like a legitimate casino and sports betting site. Unfortunately this casino is riddled with questionable practices and is best to be avoided. One of the biggest factors was that they were caught out in 2015 using pirated versions of Playtech and Microgaming software; these reports were actually confirmed by the software manufacturers themselves. Some of their software also lacks integrity where for example a player’s account was being investigated even though the software itself created a balance miscalculation.

They have a ridiculously long holding period of 30 days which prevents players from withdrawing any amounts that involve a bonus. This group of casinos has been repeatedly non-responsive to player complaints at various mediation portals. This results in many complaints regarding withdrawals which have been going on for years and the players feeling frustrated at not being able to get their money weeks or months after the requests made. Customer service is extremely poor by usually providing excuses one after the other and they quite often stop replying altogether.

They appear to be based in Costa Rica but their website shows a UK address and is held by Operia Corp Limited whose other casinos also suffer from poor pay out records.

BetDNA has over 400 online casino games and the majority of them can be accessed on any mobile device with an internet access.

Payments and withdrawals can be made by Visa and MasterCard preference to Upay, Skrill, Neteller and the up-and-coming BitCoin.

They have a first deposit match bonus of 100% when of $50 or more is first played and then additional bonuses are given for every other deposit of $100 or more. The bigger the deposit, the bigger the bonus given.

You can also bet on a large selection of competitive sport games, but as at time of writing their sports portal is currently not functioning.

Currenty there are no reviews for BetDNA. Be the first one who will review it.

BetDNA Casino supports banking methods for deposits and withdrawals for