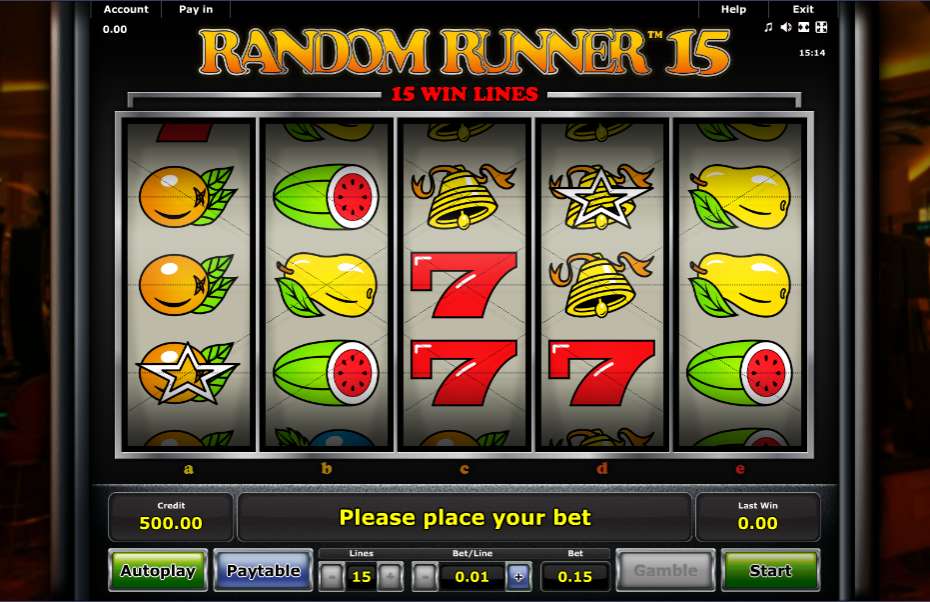 What Novomatic have delivered with their Random Runner 15 video slot is a simplistic fruit machine, and one which has none of the special features of a video slot. The Random Runner 15 game will not see you able to adjust any of the 15 paylines which appear on the 5 reels of this slot, although you will be able to select line bets which start out as low as 0.01 in value, and can rise as high as 5.00 in value in total. It shouldn’t take a rocket scientist to figure out just how much the minimum and maximum bet values are worth in the game. At its cheapest, the slot is set to cost you just 0.15 per spin, whilst at its most expensive you can expect to be able to wager up to 75.00 a pop on this slot. With a little bit of luck, players can expect to win as much as 5,000 coins via the Random Runner 15 slot’s non-progressive jackpot.

In order to bag wins on the reels, players are required to land oranges, plums lemons, bells, strawberries, grapes, watermelons, or sevens on the slot’s paylines. For this, they will pocket wins which are fair and modest in comparison to the stake wagered. However, it must be noted that even though there are 5 reels in this slot, you only need to line up symbols of 3 icons to win the top prize that each symbol can offer.

The best paying symbol in the slot is the star icon, and you don’t need to land 5 such symbols on a payline to win the top prize. In fact, you only need to line up three such symbols. Doing so will see you win 5,000 coins. However, you can also win the non-progressive jackpot by landing 3 standard fruit symbols on a line, as long as they have the star icons on them. You have – in essence – two different ways to trigger the same jackpot.

Currenty there are no reviews for Random Runner 15. Be the first one who will review it.