PIGGIES AND THE WOLF

PIGGIES AND THE WOLF 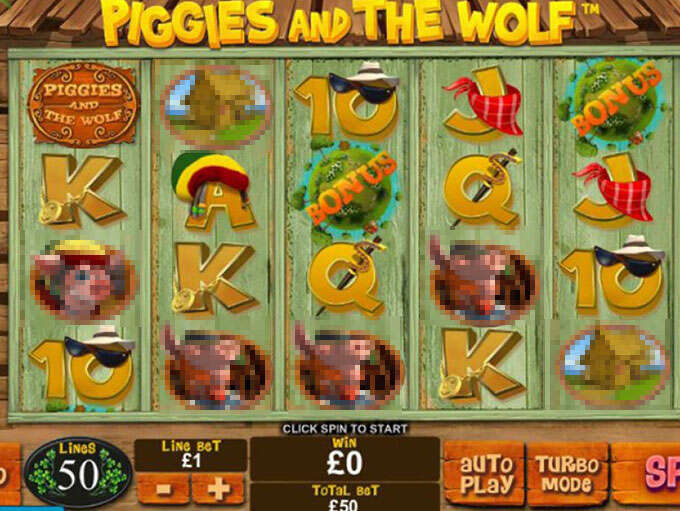 Piggies and the Wolf

About Piggies and the Wolf

Piggies and the Wolf is an animated video slot, and one which is based on the Three Little Pigs nursery rhyme, and has been designed and developed by Playtech, one of the leading developers of online slot games. Piggies and the Wolf contains 5 reels and 50 lines of comedic, and excellent graphic gameplay. The video slot can see players able to wager anything from 0.01 up to 100.00 per line, and this will bring their wager up 0.50, up to 5,000 coins in all. With a bit of luck, you can expect to be able to win as much as 1,000 coins in this non-progressive but cheeky video slot machine game.

There are so many special features in Piggies and the Wolf that you won’t know where to begin. The wolf is the wild symbol. When this icon appears on the reels, players can pocket as much as 2,500 coins in total. Wolves can substitute for all other symbols in the slot, with the exception of the bonus and scatter icons. These symbols can appear stacked in the base game on the first, third, and fifth reels. If they cover the fifth reel entirely, then they will trigger the Huff ‘n Puff Shuffle feature.

That feature will see the wolf blow away the symbols on the reels, and they will rearrange in other positions, promising you decent wins.

The scatter icon is the Piggies and the Wolf logo. When it appears 3 times on the first, third, and fifth reels, the player will pocket double their total bet. They will also trigger a free spins bonus round. In this bonus game, piggies run wild, adding wilds to the reels as they go, in one of the more entertaining features in this brilliant slot.

Lastly, if players can land the bonus world icon on the first, third, and fifth reels at once, they will trigger the Blow the House Down bonus. In this feature, the Big Bad Wolf must blow down houses in the following order – straw, wood, and brick. The better the wolf performs; the more cash prizes you will win. Should player fail to blow the house down, they can pick an instant cash prize from the remaining symbols. After blowing down the last house, the player can select one of three gas canisters to pocket additional cash prizes.

Currenty there are no reviews for Piggies and the Wolf. Be the first one who will review it.