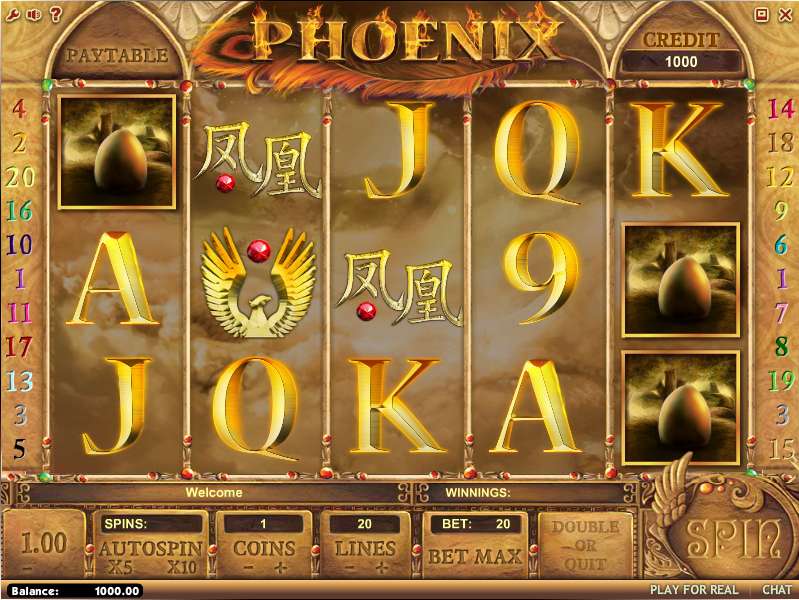 Phoenix is an awesome online video slot which is available on the iSoftbet software platform. These developers partner with many online casinos where the game may be played for real money, or simply try it out here for free, and play in demo mode. This five reel, twenty pay-line game offers a maximum prize of up to 100 000 coins. We are confident that this huge prize is going to attract many player, but there is also something uniquely special about this slot.

If we were to be asked what we thought was special about this game, besides the massive top prize, illustrations are nothing short of awesome. This game has been graphically crafted in exquisite style, where reels have been set into a Middle-eastern type backdrop. Ordinary icons are phoenix feathers, the  egg of this bird, golden feathers, gold eastern letters, and Ace, King, Queen, Jack, Ten Nine of card indices.

Special Icons include various illustrations of the Phoenix for triggering bonus rounds, as well as a wild icon which is this bird rising from the flames. This replaces any other icon except for the bonus and scatter. A phoenix eye is the scatter symbol which pays multipliers when it lands on the reels. Between one and twenty-five times multiplier can be won depending on how many scatters are shown.

Betting takes place over all twenty pay-lines, and we always suggest that all lines should be played. The amount in play may controlled by the player fromone to twenty. The coin betting range is 0.01 up to 1.00, and from one to five coins per line may be placed. Do remember that in order to win a maximum prize, a maximum bet must be placed. This is dictated by coins per line, over twenty lines, not necessarily coin size.

There are some stunning bonus features in this visually awesome video slot. Land three four or five bonus symbols to trigger the “Phoenix Bonus”.  This is the BIG paying bonus, and once entered we see even more (if at all possible) beautiful illustrations. This round is goes through three different stages to assist your Phoenix to grow into a magical fire bird. The instant bonus symbol features a prize of up to 10 000 coins, and is triggered by an awesome icon to reveal a Phoenix painted scroll. This is an instant bonus prize game. Again, this iSoftBet game offers a gamble feature which activates after all winning combinations.

Currenty there are no reviews for Phoenix. Be the first one who will review it.