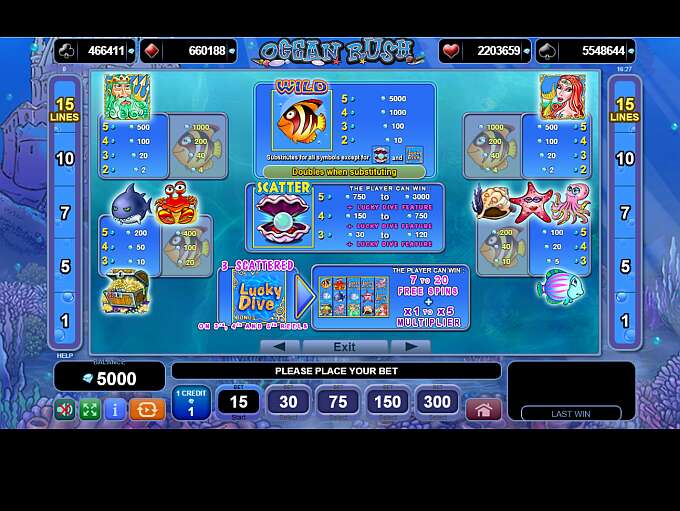 Ocean Rush is EGT’s customary oceanic themed video slot. Every developer has one or two in their collection, although in most cases, they tend to be a little bit better designed than this particular title. Ocean Rush uses quite poor graphics, and there is an element of childishness about the icons selected for the reels. On the plus side, there’s no high playing card icons. Ocean Rush is played over a total of 5 reels, with 15 adjustable paylines present. Players will note that coin values are fixed at 1.00. Minimum and maximum wagers in this progressive jackpot slot start out at 1.00 per line, per spin, and can rise as high as 300.00 per spin.

At least there are plenty of special features in the Ocean Rush slot. To start off with, the fish icon is Ocean Rush’s wild. This symbol offers players decent cash prizes when it appears in winning combinations. It can also replace all other icons, save for the two scatters, and doubles all wins that it appears in.

The clam icon can see players win anything from 30 to 3000 coins, if they land three or more of them anywhere on the reels. Players will also be fortunate to pocket free spins, if three scattered Lucky Dive icons appear on the reels. They only appear on the third, fourth and fifth reels. In the Lucky Dive feature, players will get between 7 and 20 free games, with multipliers of between 1x and 5x added to the winnings that they pocket in this bonus.

Ocean Rush also contains EGT’s customary gamble feature. Normally, we’d avoid this feature like the plague, since you only have a 50% chance of success. The player must pick either a red or black card. If they guess correctly, they’ll double the win, get it wrong and you’ll lose the lot.

Above the reels are four progressive jackpots. Each one has a suit next to it. The Jackpot Card Mystery Bonus feature is triggered entirely at random, after any spin. When it is, players can pick from a total of 12 cards. Keep an eye out for the suits on the cards. The first three cards that appear in the same suit will denote which progressive jackpot the player has won. It is a pretty easy system for offering progressive jackpots.