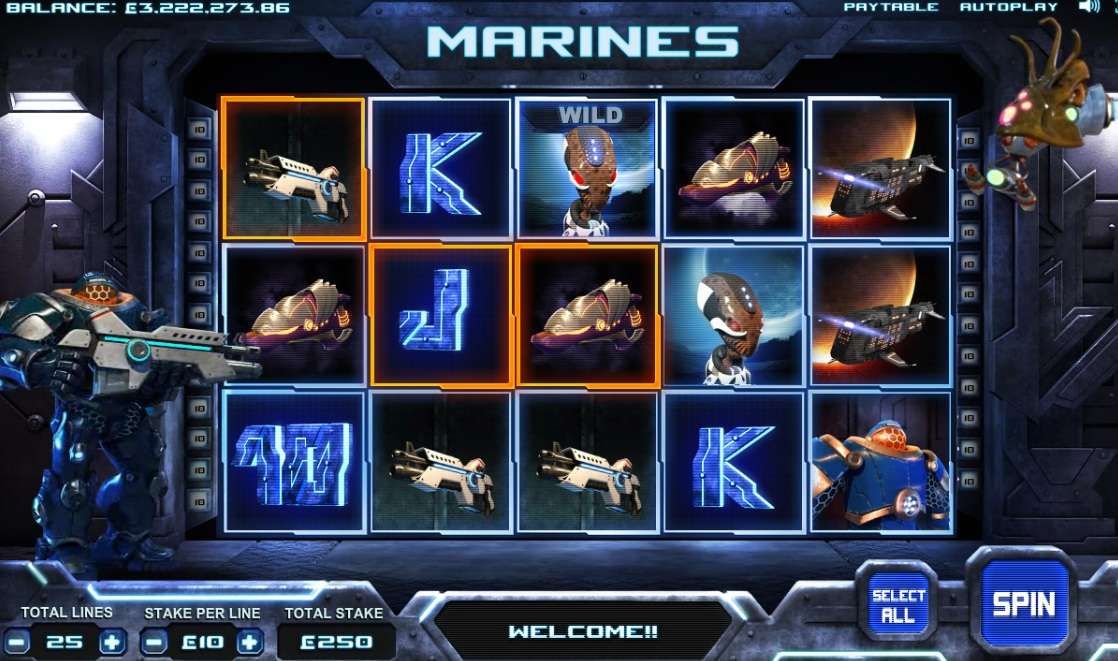 If you were expecting a run-of-the-mill marines and army themed slot machine with this game, you’d be mistaken. Instead, Cayetano Gaming have obviously heavily drawn on NetEnt’s no defunct Aliens slot machine for the bonus round, and graphics of this space marine themed slot. Set in a futuristic world, the slot resembles a cross between Doom and The Terminator. It features 5 reels and just 10 paylines of action, none of which you can alter. Marines will, however, allow you to place a total bet which range from 0.10 per spin up to 250.00 per spin. The top prize in this slot machine is non-progressive and is capped at 10,000 coins. To win it, players are going to need to land 5 wild symbols on any payline in the game, which is no small feat to say the least. Marines contains an RTP rate of 93.92% in all, which is rather low.

The wild symbols appear as your generic green-skinned alien. These symbols can do much more than just dish out the top prize in the game. They can also can provide players with a substitute symbol which can replace all other icons barring bonus, free spin and instant win symbols.

Bonus symbols appear as spaceships, and landing 3 or more them on the reels of this slot will trigger a bonus room feature.

Landing 3 or more of the laser gun symbols will activate a free spins bonus round, as well as dish out scattered cash prizes worth 5x your total stake. The free spins feature allows players unlimited free spins (with no multipliers) if wilds appear on the reels. Reels can be held and nudged in this feature, but once no more wilds appear, the bonus ends.

Instant win symbols appear as the marines, themselves. These space-age hunters can appear anywhere on the middle reel, and when they do they will offer a random cash prize which ranges from 10x up to 25x your total bet.

In the bonus room there are 5 instant win bonuses to choose from. Reload allows you to pick items, Bomb Diffuser allows you to cut the wires to a bomb, Air Strike lets you shoot enemy ships, Shoot Them Up allows you to shoot drones, and Command Ship allows you to fire rockets at enemies. All direct hits offer instant cash prizes worth between 20x and 180x your total stake.

A randomly triggered bonus is also present in this game. In the Shoot the Alien feature, you can win between 10x and 25x your total bet by taking on an alien in a battle to the death.

Currenty there are no reviews for Marines. Be the first one who will review it.