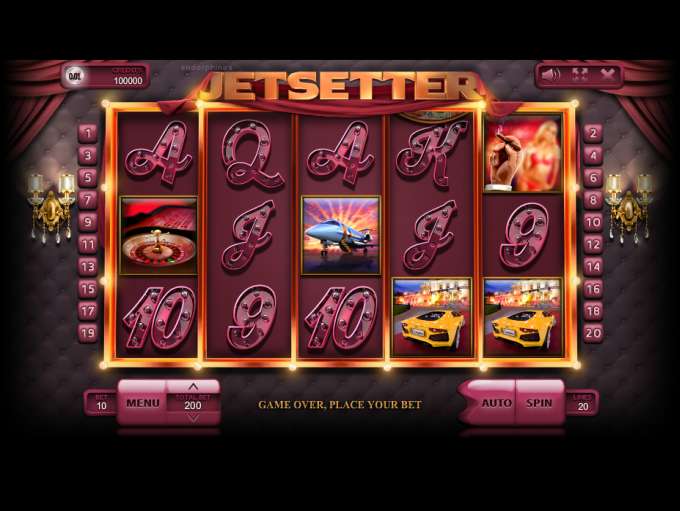 The Jetsetter video slot is an online casino gambling game which is all about the lifestyle of the rich and famous. The slot is very violet in colour, perhaps pretty in pink would be a more accurate description. It is also fairly rich with it graphics. Jetsetter features 5 reels and just 20 lines, and has been brought to you by Endorphina. The slot doesn’t give you a whole bunch of wiggle room when it comes to your wagers, which can range from 20 credits, up to 200 credits per spin. Players can win as much as 10,000 coins via this non-progressive video slot game. To do so, they must simply land 5 scatters anywhere on the reels.

Jetsetter’s logo is also its wild symbol. As a wild, it can replace all other symbols in the game, barring scatter icons. Wilds can double all wins in which they appear. They can also offer you wins worth up to 9,000 coins by acting a big-paying symbols themselves.

Scatter icons take the shape of a big-spending lady. She can appear on all of the reels of the game, and if she lands on the reels 2, 3, 4 o 5 times in any position, then you will pocket scattered wins worth 40, 100, 400, or 10,000 coins, with the latter being the aforementioned non-progressive jackpot.

Should the player land the left and right sides of the banknote side by side on the reels, then they will pocket an initial bet multiplier, which is nice little side-feature to have included in the video slot.

Jetsetter’s bonus round is nothing to shout about. This simple Endorphina developed video slot has a very basic bonus game. If you can three or more of the scatter icons anywhere on the reels, then you will qualify for a free spins bonus. In this bonus, you will begin with a total of 20 free games, although the chance is there to bag more than that by landing further scatters. It should be pointed out that there are no real multipliers attributed to your winnings in Jetsetters.

Ultimately, this video slot is alright, but you can’t really give it much more credit than that. It is plain, its features are a bit dull, and it doesn’t give you a lot of control over how your bets are made. In short, it’s not the friendliest slot out there.

Currenty there are no reviews for Jetsetter. Be the first one who will review it.