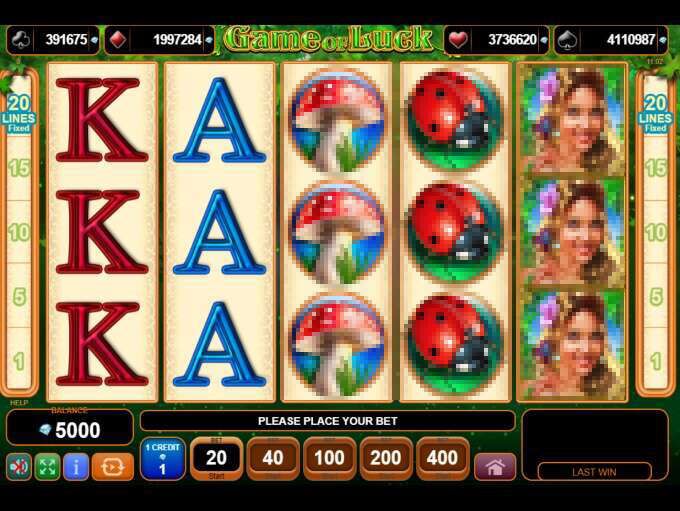 About Game of Luck

Game of Luck is an EGT developed slot game, and one which features their four major progressive jackpot prizes. The game is all about several lucky charms or items, including toadstools, ladybirds, and more. It features nice enough graphics, although perhaps the theme is a little too predictable. In terms of gameplay, the Game of Luck slot offers players 5 reels and 20 paylines to bet on. The game is not very flexible when it comes to setting up your bets, with minimum and maximum wagers extending from 1 credits per spin (based on a single payline of gameplay), up to 400 credits per spin. Up to 4,000 coins can be won at any one time in this slot.

The horseshoe wild icon can substitute for all other symbols in the slot, with the exception of the coin and clover icons. It also doubles as one of the best paying icons in the game. This wild is capable of appearing on all of the reels of the game.

The scatter icon takes the shape of a golden coin. This coin (with a 7 imprinted on it) can offer you the top non-progressive jackpot of 4,000 coins if 5 appear anywhere on the reels.

A gamble feature has also been included into this slot, although it won’t let you gamble if you have won more than 700, so that is a bit cheap. You must guess the correct colour of the next card to double your winnings, or you will lose.

There is a petite bonus feature in this game. If the rainbow/clover icon appears on the second, and fourth reels, respectively, then the player will notice that they stretch to neighbouring positions and become wild. These wilds can replace all other icons save for golden coin scatters. This bonus round is known as the clover feature.

Currenty there are no reviews for Game of Luck. Be the first one who will review it.