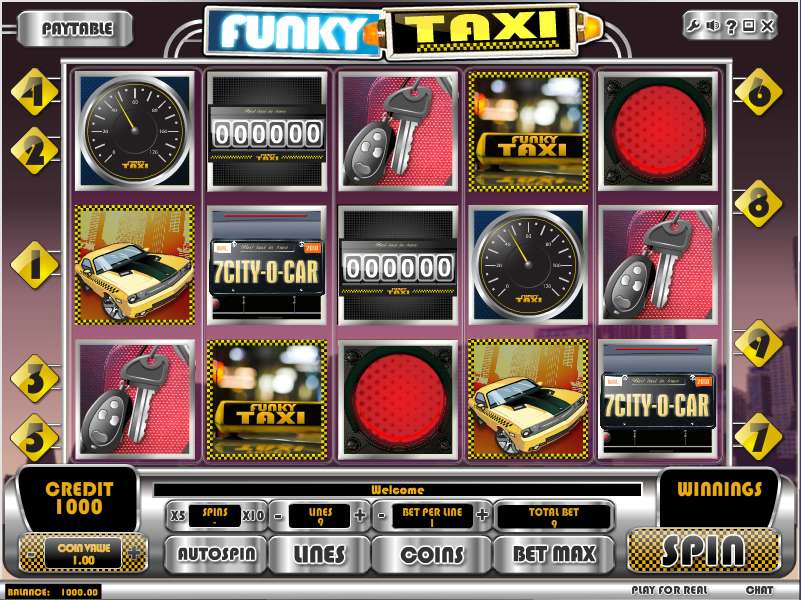 Funky Taxi is a casual slot that that has a feel good vibe and doesn’t take itself seriously. Unlike the 1976 movie Taxi Driver, you don’t have to worry about seedy venues, angry taxi drivers or violent encounters. This has more of a feel to the PS3’s Crazy Taxi where your goal is to get your passengers to their destination as quickly as possible.

This slot is produced by iSoftBet and offers 5 reels and 9 pay lines. The icons in the game include the namesake yellow taxi, a Funky Taxi sign, a license plate, car keys, neon Sevens, a red light, a pair of lucky dice, speedometer, odometer, a canister of branded Taxi oil and a Taxi street sign. There is also a X2 and X4 symbol to multiply winnings on the line.

You have spinning car tire with the word WILD in its centre and this will be able to stand in for other symbol to complete a pay line and if you’re lucky, it can help to form and complete multiple lines.

There is steering wheel scatter which is great to get as it multiplies the initial bet placed. The multipliers are 1, 2, 5, 10 and 25 times for one to five scatters that appear respectively.

When you get three or more "BONUS TAXI" symbols a little bonus round is activated. You get taken to a view of a simplistic city scape where your yellow cab starts off at the taxi rank. All you have to do is select three locations to take you passenger to before finally dropping them off at the train station. The locations you can visit are the sports stadium, office park, dog parlour, donut shop and the hospital.

The cab will then travel to each of those locations and cause some mischief along the way like a crazy taxi by crashing through barriers, cones and one way streets, all to rush your passenger on his trip. At each stop there’s bit of a delay as we presume the passenger actually visits the site and then you are rewarded with a random multiplier, and they are multiplied to each other to give a fantastic bonus. Once done the last stop is the train station, and then back to the main game.

Currenty there are no reviews for Funky Taxi. Be the first one who will review it.