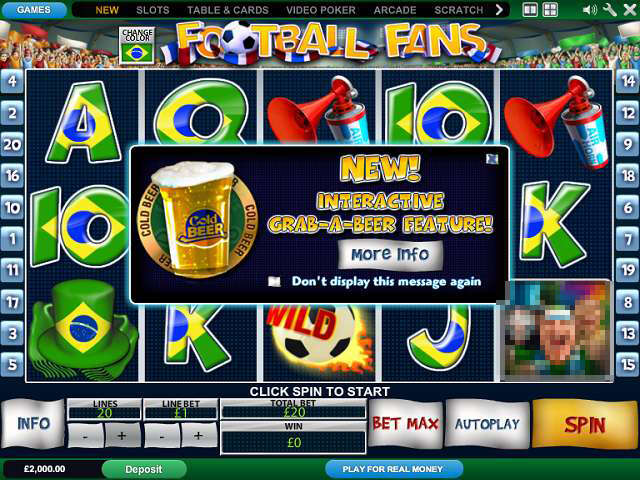 Football Fans in an online video slot from Playtech, which tries in earnest to represent the global community of football fans from across the globe. In doing so, it has turned itself into a rather comical video slot, but one which is packed with exciting special features all the same. Football Fans features 5 reels and 20 paylines of gameplay, with players able to bet on the number of lines individually, via line bets. Line bets stem from 0.01 up to 25.00 a pop, giving this football mad slot minimum and maximum wagers of 0.01 per line, per spin, and 500.00 per spin, respectively. You can win as much as 5,000 coins on this non-progressive video slot, by lining up 5 wilds on any active payline.

Let’s stay on those wilds for a moment, since they are rather special icons. Wild symbols can replace all others in the game, barring the free games symbol. As we’ve said, they are also the best paying, jackpot icons in Football Fans. They take the shape of a burning football, so they are quite easy to spot.

The free games icon is the Football Fans logo. When it appears 2, 3, 4 or 5 times in any position on the reels, the player will pocket scattered wins worth 1x, 3x, 20x or 100x their total bet. Players will also be able to pocket 10 free games with random wild features, when they land 3 or more scatters icons anywhere on the screen.

These two features can result in fairly sizeable pay-outs.

The Grab a Beer feature is also rather spectacular. It also acts as a scatter icon, offering players 5x, 50x, 150x or 500x their total bet, for landing 2, 3, 4 or 5 such symbols on the reels in any position. More to the point, this icon will also offer players the chance to win 3x their total bet, if they manage to play a golden circle on top of any beer icon.

Football Fans is a rather unique game. Not directly because of its theme, because there are many football themed video slots out on the market. It is because of the way that Playtech have chosen to represent this theme, by using the fans instead of players as the main focal point of the slot, which makes the game interesting and original.

Currenty there are no reviews for Football Fans. Be the first one who will review it.