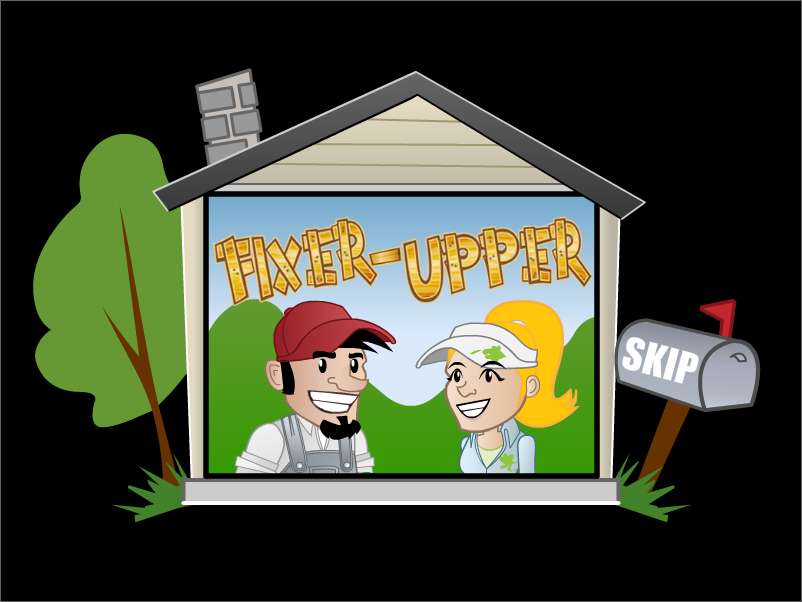 Fixer Upper is one of Rival Gaming’s classic slot machine games. After the quirky introductory video is finished, you will be taken to the reels of the game, where you can find a host of very simplistic symbols sitting. Those icons are all part of the “home improvements” and DIY theme of this video slot. A total of 5 reels and 20 lines are playable in the game, which contains coin sizes of 0.01 up to 0.05- Players can bet up to 10 of these per line, they can adjust the lines and that will see them wager anything from 0.01 per line, per spin, up to 10.00 per spin. A maximum bet of just a tenner a spin is going to please everybody, really.

Fixer Upper uses a ladder as its wild symbol. When this ladder icon appears during the base game in a winning combination just once it will multiply your winnings by 3x their normal rate of pay. Having 2 or 3 wilds in a winning combination will be worth 4x or 5x your normal winnings, respectively. Wilds can replace all other icons, save for bonus and free spin icons.

The handy woman icon is the game’s free spins symbol. Should she appears 3, 4 or 5 times in any positions on the reels, then the player will trigger a free spins bonus worth 15, 30 or 50 free games, respectively.

The handyman is also a pretty nifty icon to land. It can result in more than decent wins if found, although the best paying symbol is the wild. Players can win a non-progressive jackpot worth 8,888 coins for landing 5 on any active payline.

Players should keep an eye out for the wrench. When this icon appear 3 or more times in any positions on the reels, it will trigger Fixer Upper’s bonus round. The bonus round could consist of one of three different bonus games. In one of them, players must fix the pipes to unclog the drains and bag credits.

Another bonus round involves knocking out gophers in order to clear the garden and bag further cash prizes. Lastly, there is a bonus game where player must paint a room to win cash prizes. All of the bonus games have roughly the same prizes, so it doesn’t really matter which one you trigger.

Currenty there are no reviews for Fixer Upper. Be the first one who will review it.