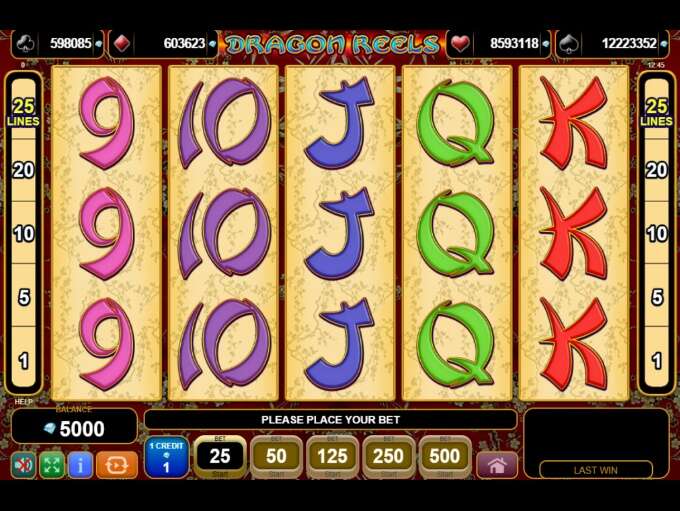 Dragon Reels is one of EGT’s progressive jackpot slot machine games, and to be perfectly honest, it doesn’t really give off the theme its title suggests. Instead, plenty of high playing card symbols appear stacked on the reels of this slot, with its thematic images kept at a minimum. The slot machine features 5 reels and 25 paylines of gaming action, with players able to select total bets which stem from 0.25 per spin, up to 500.00 per spin. That’s a pretty broad wagering range for this type of slot machine game. Given that there are four progressive jackpots which can be won at random in this slot, there is no cap on the total amount you could win by playing Dragon Reels. Some jackpot prizes are understandably worth more than others, though.

The dragon symbol acts as a wild icon in this game, and when it appears on the reels, it can substitute for all other symbols in the game. This icon also acts as a secondary jackpot triggering icon. Land 5 on a line to win a non-progressive prize which is worth 5,000 coins.

The scatter icons appear as a dragon emblem – not the Chinese dragon icon itself, which as we’ve said is a wild – and it can offer scattered wins when it appears 2 or more times in any position on the reels. As well as triggering scattered wins worth up to 2,500 coins in all, this symbol can also trigger a free games feature when it is located 3 or more times in any positions on the reels during a single spin.

A gamble feature has been included in the Dragon Reels slot, and this simple game can see you double your win if you can predict whether the next card in the sequence will be a red or black symbol.

The free spins bonus round is pretty simplistic in the Dragon Reels slot. Players can bag a total of 10 free spins from 3 or more scatters. During the bonus round, any winning combinations they pocket will have their value doubled. Wild symbols can substitute for all symbols, including scatter icons in the bonus, whilst the scatters can also retrigger the feature should enough appear on the reels whilst the bonus is in session. Only five spins are given when the feature is retriggered.

Dragon Reels is a rather poor slot from EGT, and not one which too many players are going to flock to, even if it does contain a progressive jackpot.

Currenty there are no reviews for Dragon Reels. Be the first one who will review it.