DARING DAVE & THE EYE OF RA

DARING DAVE & THE EYE OF RA 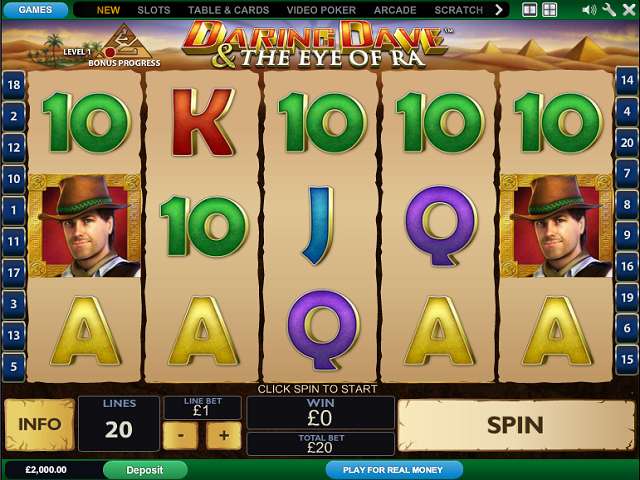 Daring Dave & The Eye of Ra

About Daring Dave & The Eye of Ra

You know what they say about a good idea, keep reinventing and rehashing it since the latest generation won’t have experienced it yet. Taking a leaf from Indiana Jones and the Kingdom of the Crystal Skull movie continuation released in 2008, Playtech has taken this to heart and created this video slot based on this tomb raiding adventurer. If you need more proof that this kind of idea work, the fifth Indiana Jones is set to be released on July 19, 2019.

Daring Dave & The Eye of Ra takes place in Egypt where our dashing adventurer has entered into a mysterious and unexplored section of the main Pyramid of Giza to find the Eye of Ra. This game contains five reels with three rows and 20 adjustable pay lines which means that depending on the value of the coin you select, it will be multiplied by 20 to be the cost per spin. Each coin value can go from as little as £0.01 right up to £50 making the bet per spin range from £0.20 to £1,000.

The symbol used are classic card symbols from the number 10 to the Ace and representations of popular Egyptian gods and icons namely a beetle, a lion, or Thoth, Anubis and Horus. The intro video is exciting and promotes a great adventure to begin, but the graphics in the game are a real let down as the symbols look simplistic and cartoonish although the effects do make up for it to a minor extent.

Daring Dave plays the role of the wild card and he can randomly expand to make the entire reel wild. This is great for drastically increasing chances at winning something.

For the scatter, the golden Eye of Ra is in the form of an amulet where the presence two or more of them scores a win of up to 125 coins.

The most exciting feature is when the Pyramid symbol appears on both reel 1 and reel 5 of the game. On the top left of the screen you will see your current progress in the bonus rounds. Completing all three episodes awards a 75x your stake jackpot.

Episode one has you pick between eight stones and if you find three with the Eye of Ra you move onto the next level. Episode two is similar but this time it’s on a spinning wheel of fortune; again land three Eyes and you can progress. Last on is the big one: choose a pedestal that may contain statue of the Ra and the prize is yours! The best part is that if you are unsuccessful at any level, you continue at that point when you get the Pyramids again.

Currenty there are no reviews for Daring Dave & The Eye of Ra. Be the first one who will review it.