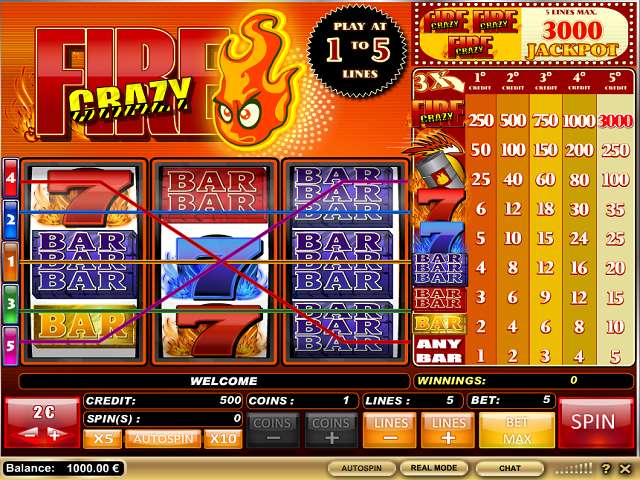 This slot from iSoftbet certainly has an unusual theme. A ball of flame is quite prominent on the screen at all times. It has a demonic face with red eyes. It also has hair which seems to be made out of fire.

Crazy Fire slots has just three reels and five pay lines. You choose the size of coin you want to bet, ranging from 0.01-2.00. You can bet up to five coins on each line and you should bet five, since the maximum jackpot is only paid if you played the maximum coins.

The game board of Crazy Fire certainly gives you the appropriate colours of heat. Most of the board is covered in orange, red and white. Since there are only three reels in Crazy Fire, there is enough room to keep the pay table on the screen at all times/ If you have a winning spin, the amount you collect will light up on the table.

Even though the theme in the game is unusual, most of the symbols are familiar. The lowest paying symbols are the Bars, with the normal pattern of singles, doubles and triples. There is also a small return if you can get any three bars on one line. Another familiar symbol in Crazy Fire is the Lucky 7, which pays better than the bars. There is one red 7 and one blue 7, both sitting in rising flames.

Two of the highest paying symbols in the game are certainly appropriate for the theme. There is a highly flammable barrel of gasoline which can pay as much as 100 coins. Another distinctive symbol is a flaming fire sitting under a broiling sun. That symbol can pay as much as 250 coins.

There is no Wild symbol in Crazy Fire, nor a progressive jackpot or any bonus game. However, you still have a chance to get a huge payoff in this game with the top paying symbol. It is the Crazy Fire Logo, which plays at least five times more than any other symbol.

If this same payoff pattern was followed for five coins, the payoff for five Logos would be 1,250, but the rezzturn is much bigger. You'll collect 3,000 coins.

Currenty there are no reviews for Crazy Fire. Be the first one who will review it.