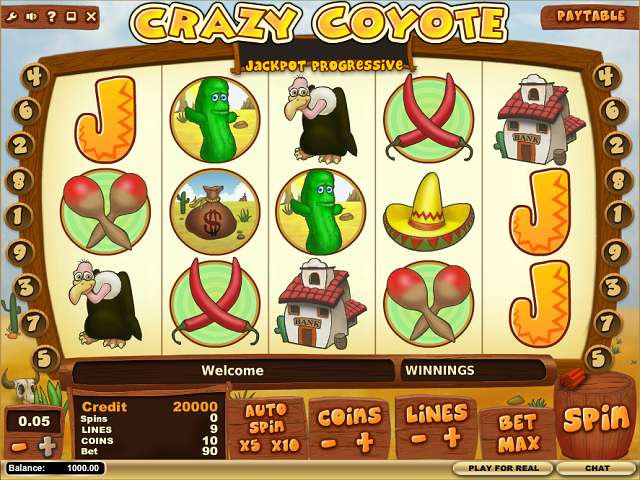 Crazy Coyote is an iSoftBet developed video slot, and one which uses elementary graphics to weave and tell a tale of nature in the US Midwest (with a hint of Looney Tunes’ Wile E. Coyote to boot). Cacti, vultures, chilli peppers, pueblos, hats, and appropriate designed high playing cards all fit the bill in this video slot. It offers players a total of 5 reels and just 9 paylines to bet on, whilst allowing them to adjust the value of their coins, and how many they wish to bet per line, too. Coin denominations of 0.01 up to 0.05 can be chosen, whilst up to 10 of those can be bet per line. At its cheapest, this slot will only set you back around 0.01 per line, per spin. At its most expensive, the game can cost you up to 4.50 per spin. In short, no, it won’t bankrupt you at all. This video slot is a progressive jackpot slot machine game.

A wild icon is present in this game, and should a player land one on the reels, they will find that it can replace all other symbols in the game, except for 2x, 4x, progressive and scatter icons. Wilds do not pay out anything on their own.

Scatter icons are represented by the Wile E. Coyote lookalike himself. When this symbol appears 1, 2, 3, 4 or 5 times in any position on the reels, players will pocket scattered wins of 1x, 2x, 5x, 10x or 25x their total bet, respectively.

Funnily enough, there isn’t really a bonus round in this game. Crazy Coyote instead features multiplier icons. These count for all wins, exception for progressive jackpot pay-outs. If players land X2 multipliers in winning combinations, then they will pocket double the winnings. Should a X4 multiplier appear on the reels, then they will pocket 4x the normal amount they would win. Multipliers icons can only appear on the first and fifth reels, but can really make the difference between a so-so win, and a truly enormous win. This game doesn’t have the best features, but those it does have do make it enjoyable to play.

Currenty there are no reviews for Crazy Coyote. Be the first one who will review it.